I’ve never liked James L. Brooks’ films. From Terms of Endearment on, his glossy, unfunny romantic comedies have featured cozy platitudes and heartfelt, overwritten speeches dispensed by self-absorbed characters. For his latest film, the 70-year-old writer-director has engaged a bunch of talented younger actors who labor to inject some spark into his fusty material. They are sporadically effective in a losing cause. 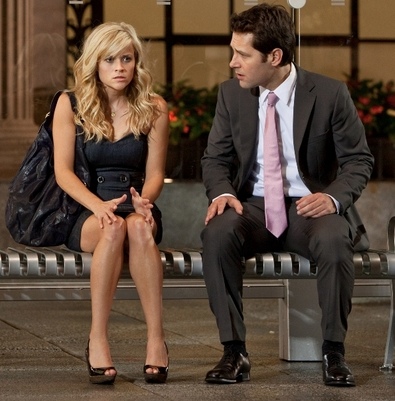 The film concerns two people who’ve been blindsided. An executive at his father’s Washington, D.C.-based company, George (Paul Rudd) is shocked one day by a federal indictment for wire fraud. His dad (Jack Nicholson) advises him privately but for appearance’s sake has to fire George and order his other employees to avoid contact with him. In another part of town, Lisa (Reese Witherspoon) is a veteran Olympic softball player who’s unceremoniously dropped from the U.S. national team because of her advancing age. Her self-esteem in tatters, she starts dating Matty (Owen Wilson), a major-league baseball star with a long string of bedroom conquests. Despite this, a mutual friend sets up Lisa with George on a blind date, and she senses something different when she’s with him.

The three lead actors are all charming, with Wilson providing genial obliviousness to a potentially unlikable part and Witherspoon being spunkier than usual — catching herself in tears, Lisa rolls her eyes at her own weakness. A gifted clown, Rudd is given free rein here, and his performance is the best one in this cast. He scores big laughs in wordless bits like Lisa’s first view of George across a restaurant dining room with his head in his hands or slumping over at the waist and touching his forehead to a table when more bad news comes down.

Yet the characters they’re playing are astonishingly naïve. Why does George stay loyal to his dad even after the man turns out to be so very undeserving of it? For that matter, why is George shocked that his dad might be a crook? (The casting goes wrong here. The older part needed an actor who could project a façade of spotless integrity. Whatever else Nicholson is, he’s not that guy.) And why is Lisa appalled when Matty casually admits to her that he’s seeing women on the side? On the morning after her first sleepover, he gives her one of a stack of pink tracksuits that he keeps in his closet for just such occasions. She’s really surprised that this guy has trouble with the concept of monogamy?

Just as in other Brooks films, these characters know their own emotions all too well, and they articulate them in thoroughly composed sentences with subordinate clauses and abundant qualifiers, sometimes two or three of them before the main idea. No one is ever so overcome by the moment that they’re lost for words, and the marriage-proposal scene between George’s assistant (Kathryn Hahn) and the father of her child (Lenny Venito) is a huge drag late in the film. You spend too much of How Do You Know wishing that these people — and the movie that they’re in — would just get to the point.

How Do You Know