If you go to The Fighter expecting a generic uplifting sports drama, you will get a very good one. If you go to it expecting a crazy stylistic exercise like David O. Russell’s other films, you’ll be disappointed. I must admit I’m in that second camp, but that shouldn’t prevent me from appreciating this movie’s solidity and craftsmanship. Nor should it prevent you.

The story is that of “Irish” Micky Ward — no “e” in “Micky” — a champion welterweight boxer from Lowell, Mass., best known for an epic trio of fights in 2002-03 against Arturo Gatti. The movie, however, ignores the Gatti bouts and instead focuses on the events leading up to Ward’s first title. Having lost four consecutive fights in 1990, Ward needed surgery to repair his right hand and had gone from promising to washed up. However, after taking time off from boxing (and paying his bills by working on a road-paving crew), he returned better than before and won his way to the title as an underdog. 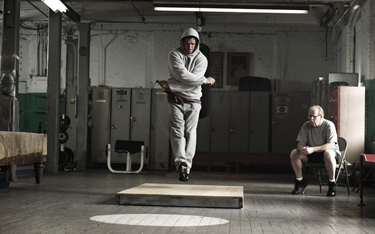 The biggest obstacle in this telling, though, isn’t Micky’s opponents in the ring, but his own family. His blowsy mom (Melissa Leo) micromanages his career, and her bad advice leads Micky into a severe beating at the hands of a fighter in a heavier weight class. Meanwhile, Micky’s half-brother, Dick Ecklund (Christian Bale), insists on training him but can’t stay out of jail because of his crack habit. For all this, Micky can’t imagine continuing without his family, especially Dicky, who taught him how to box. It’s up to Micky’s new bartender girlfriend, Charlene (a much grungier than usual Amy Adams), to suggest that he might be better off with professional guidance. Micky’s mom and seven sisters react to this by marching over to Charlene’s house to beat the crap out of her.

Wahlberg is strong in the lead role, but the acting honors here are stolen away by Bale, who lost a scary amount of weight for the role. The Welshman has built his reputation playing rich Americans, but he is a live wire in this working-class role. For viewers who find this performance on the cartoonish side, the movie features a clip of an interview with the real Dick Eklund over the end credits showing that the man really is like this. Never mind that, though. Bale makes this man with his own obstacles to overcome into a compelling figure, never more so than in the scene when Dicky’s pride at starring in an HBO documentary turns to mortification as the TV program shows him what his behavior looks like to everyone else.

Director David O. Russell was one of cinema’s most promising filmmakers in the late 1990s but went off the rails in the past decade, directing only the 2004 misfire I a Huckabees and acquiring a reputation for insane on-set behavior. Wahlberg acted for Russell in both Huckabees and his 1999 masterpiece, Three Kings, and in his role as this movie’s producer brought Russell on board. The director responds with a fine, controlled performance, laying out the story without any frills and with an eye for the New England atmosphere. How fitting that a director so much in need of a comeback should find it in such a rousing comeback story.