Ten years ago, when he was 28, Juan Wertz, who was waiting tables at the time, began experiencing swelling in his hands and feet. Next came the out-of-control vomiting and the intense abdominal pain. After several unsuccessful laparoscopic procedures, Wertz was still without a diagnosis.

Four years ago, Wertz, who lives in Hurst, learned that a rare and incurable disease called hereditary angioedema (HAE) had been causing all his health woes. That didn’t solve the other major problem with his health, however: He’s uninsured, more than a million dollars in debt, and hoping that healthcare reform will offer him a better quality of life. But as always, with HAE as with the politics of healthcare, nothing is for certain. 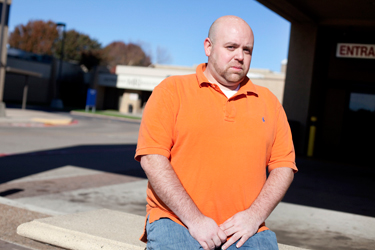 Four years ago, Wertz’ sister Shannon was at the end of her rope. The entire family had relocated from Houston to North Texas for the family business. Juan was living close to Harris Methodist HEB Hospital so he could be near the emergency room that he constantly relied on for care and near the rest of his family because he depended so heavily on them for emotional and financial support. He had been sliced into too many times to count, including a pointless appendectomy and gall bladder removal, and nothing was working. Shannon made a call to her father’s estranged side of the family in California to ask if anyone there had had similar problems.

Her diligence broke the case. Two of Wertz’ California cousins had also suffered the pain and swelling, and a doctor there had correctly diagnosed them with hereditary angioedema. An internist in Hurst confirmed the suspicion with blood work, and at last Juan’s monster finally had a name.

Hereditary angioedema, which affects about 10,000 people in this country, is caused by a deficiency of a protein that affects the way the body processes water. Sufferers experience debilitating swelling in the hands, feet, face, throat, and abdomen. The cases vary in severity, and some can be fatal. Although the FDA lists no officially accepted cure, a few experimental drugs offer hope to those who suffer the worst from the disease.

Until recently, Wertz relied on the John Peter Smith Hospital insurance plan for coverage, but a paperwork snafu cut him off from that insurance — which had offered only limited help in any case. The problem is that experimental drugs are not covered by public plans like JPS’ Connections program, leaving Wertz to bear the full cost of the drugs, which can cost as much as $9,200 per week. Another local HAE sufferer, who asked to remain anonymous, shares her stash of one of the drugs, Berinert, when his symptoms become too much to bear.

Wertz never knows what will trigger another episode. Sometimes, it’s a cold, sometimes stress. Certain foods can cause swelling, but he never knows when or whether the foods will affect him badly, so he’s had to cut out much of his former diet as a safety precaution. His hands or feet swell at least once a week. When the severe abdominal pains and swelling hit, about once a month, they completely disrupt his life. Since he knows he won’t be able to pay the bills he gets, Wertz tries to hold out as long as possible before seeking medical help. “It depends on the severity of the attack,” he said, “but when the pain and vomiting are bad enough, I just show up at the E.R.”

Though he ends up in the emergency room at Harris Methodist HEB roughly 12 times a year, Wertz is frustrated that the doctors treat him like a first-time patient each time. “The docs don’t know anything about” hereditary angioedema, he said. “You’re still looked at like an idiot when you walk in, and you pay for tests you don’t need.”

Probably because he turns up so often, many doctors assume Wertz is just there to get prescriptions for painkillers. When he does get a prescription for something to help with the agony associated with HAE, the drugs rarely do the trick. “They will prescribe pain meds, but you don’t get too high a dosage,” he said. “It barely takes the edge off the pain.”

His attacks are so painful that Wertz is sometimes physically unable to type or even get out of bed to go to work. His HAE attacks are “like someone puts your finger in a vise and just keeps squeezing. Or your whole arm. Or like someone is punching you in the stomach over and over again.”

Having to deal with that level of pain affects Wertz in much more than just the physical sense. He recently started working for a company that contracts with Bank of America’s mortgage division. He wants to work so that he can start making a dent in the mountain of medical debt he has accumulated, but sometimes work itself is impossible. He has missed three weeks from the job in the last two and a half months. “It’s hard to type with my hands so swollen,” he said.

Working in the mortgage industry, Wertz knows that filing bankruptcy can be a difficult road to follow. Realistically, he also recognizes that he will not be able to reimburse hospitals for the care he has received. Last year, in a month-long stay in which doctors tried to prevent abdominal swelling from killing him, Wertz was discharged with a bill for more than $100,000. He opens piles of mail every week demanding money, and he answers several calls a day on the same topic.

“As of right now, I don’t know what I’m going to do,” he said. “I wish there were solid answers. You pay as you can.”

When bill collectors call, Wertz calmly explains his story. “They’re not nice in the beginning,” he said. “I understand I owe them money. I can only do what I can do. They back down after I tell them the story.”

The rules of America’s for-profit healthcare system leave Wertz, for the most part, in a painfully expensive limbo. His income makes him ineligible for Medicaid, and no private company would touch him because of the financial liability he represents. Even if they did, many companies don’t cover Berinert and other experimental drugs that give HAE sufferers some relief. And insurance wouldn’t keep him from ending up in the emergency room for many episodes, because the swelling occurs so quickly — or make it likely that emergency room doctors would know the treatment for every rare disease that walks through their doors.

At this point, Wertz could use some help. If President Obama’s healthcare reform plan survives the next session of Congress, Wertz thinks he will get it. In 2014, insurers will no longer be able to turn him down for coverage on the basis of his hereditary condition. If the FDA approves Berinert or another drug for treatment of HAE, those costs might then be covered, and his suffering would be reduced.

For now, he can only wait and hope. “You take your normal days and live with it [hereditary angioedema] the best you can,” he said. “You don’t want it to take control of your life.”