When the Kimbell Art Museum announced plans two years ago to build a new wing on the block-long stretch of grass and trees outside its west lawn entrance, officials promised to do their best to preserve the trees — both the big old post oaks scattered around and the smaller hollies that had been an integral part of the entrance designed by famed architect Louis Kahn.

“Visitors to the new Kimbell building will park in an underground parking garage and ascend into a green setting that preserves an historic allee of trees running between the two museum structures,” the museum said in a 2008 press release. “There they will be poised to appreciate Kahn’s west entrance.” 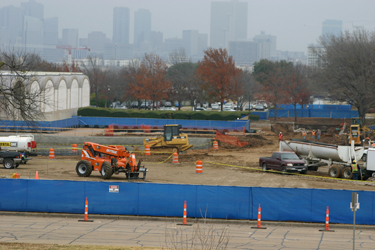 But when the project began in October of this year, all of the trees disappeared into the ensuing crater of a construction site. The Kimbell had changed its stance.

“Trees and shrubs, many of which are unhealthy or are nearing the end of their life expectancy, will be removed,” the museum wrote in a press release. “Later in the building program there will be a complete replanting and landscaping, the details of which have yet to be finalized.”

Many who watched the dozen or so 75-year-old post oaks, many of them with trunks two feet thick, being razed by backhoes were mystified. When the grove of yaupon holly trees fell to the backhoes as well, even more questions were raised.

For local poet and artist Tammy Gomez, the way the Kimbell went about taking out the trees was as bad as the loss of the trees themselves. “All of a sudden they had a blue fence up around the property, and no one could see what was going on at the site,” she said. “Before construction began, they should have invited people from Fort Worth to say good-bye to their cherished space. This lack of consideration for the community was very insulting.”

The reasons for the changes are twofold. The Kimbell “consulted with an arborist who concluded that most of the trees are former street trees that were planted in heavily compacted soil and are in failing health,” said museum spokeswoman Jessica Brandrup. 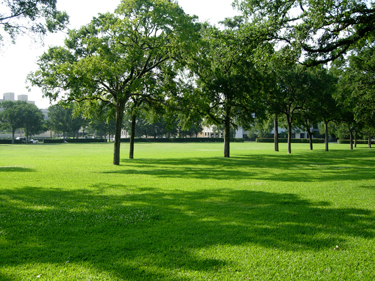 Also, the design of the addition, by architect Renzo Piano, was changed to allow for a larger below-ground parking garage and a tunnel for moving art between the new and old buildings. Those changes made it necessary to remove the trees during the construction period. Museum officials considered excavating the trees and moving them into storage, but the arborist advised against that, Brandrup said.

“The yaupon holly trees were straggly from severe weather, had outgrown the west entrance, and had begun to choke the building,” Brandrup said. “They will be replaced by trees of a scale originally intended for the building.” The new 85,000-square-foot expansion is scheduled to open in 2013.

Fort Worth’s tree ordinance, which came into play, can be confusing. The text of the ordinance runs about 45 pages, with different rules for commercial, housing, and industrial developments. The Kimbell plan to replace the old trees with new ones appears to comply with the ordinance — but there’s no requirement to replace big old oak trees with more big oak trees.

The Kimbell is required to replant the remaining greenspace with enough trees to cover about 35 percent of the area with canopy, “and they exceeded that by about 20 percent, based on preliminary plans sent to the city,” said city spokesman Bill Begley.

“The ordinance does not address the age or diameter of the trees that are removed, only the canopy coverage it provides,” Begley said. The replacement trees will be judged on the “type and size of the tree at maturity.”

City code allows the replacement trees to be as small as two and a half to three inches in trunk diameter. But Brandrup said the $125 million project includes money to replace the big oaks with trees about the same size.

Attempts to expand the Kimbell, which opened in 1974, have always been controversial. In 1989, the museum proposed adding two wings, but howls from architects and Kahn’s widow, Esther Kahn, quickly scuttled those plans.

By 2006, Kimbell officials were again talking about the need for more room for the museum’s permanent collection and larger special exhibits as well as a larger auditorium and more education and library space. This time the debate focused mostly on where to put the addition rather than whether to build it at all. Both the west lawn and a surface parking lot on the east side of Van Cliburn Way were considered.

Parking became an issue. Kimbell patrons were used to parking on the surface lot and entering through the stately but plainer back door, instead of following a path through the trees and beside the pool, as Kahn had intended. Piano convinced the museum’s board of directors that an underground parking garage would bring visitors into the new building via the greenspace.

Whether Kahn was wedded to the open space has been difficult to judge. His original design took up almost the entire west lawn, but funding issues scaled that back. Charles Birnbaum, president of the Washington, D.C-based Cultural Landscape Foundation, said he has some proof that the trees and green space were very much an important part of Kahn’s thinking.

“The dialogue Kahn had with Mrs. Kimbell shows that the entrance with trees in a very large space was very important to him,” Birnbaum said. “In a June 1969 letter to her, Kahn wrote, ‘The west lawn gives the building perspective.’ Accompanying the letter was a sketch of the project with portions labeled ‘MUSEUM’ and ‘ENTRANCE OF THE TREES’ in bold-faced cap[ital]s.”

Because the post oaks were originally planted along a side street that was eventually turned into green space, “there was a corridor of trees that led from the north and south to the museum entrance. Those trees were as significant as the museum itself,” Birnbaum said.

“I don’t think [the Kimbell] will be able to replace those trees in a way that replicates the originals,” Birnbaum said. “It will take out the character of a defining feature. I think it was a mistake to build this expansion on the lawn in the first place, but it is very surprising for me to learn that they have taken all of them out, especially when they originally stated they were going to preserve those trees.”

Brandrup said not as much green space is being lost as people think. “The new Piano building footprint will occupy approximately one-third of the lawn area, and all of the new lawn will be accessible for recreational activities, including the sod roof that will cover the western half of the new building,” she said.

“Because of the construction [for] this much needed expansion and the age of the trees at that entrance to the Kimbell, we had no choice but to remove the trees,” Brandrup said. “But we are committed to replacing the trees with ones that are similar in size, because we want to preserve the green space. I think the citizens of Fort Worth are going to be impressed with what they see when we are finished.”