Just as falling in love is a part of life, so too is breaking up. Yet most movies leave the subject of breakups in the background, if they address it at all. A breakup often happens to the heroine at the beginning of the movie, and no matter how humiliating or painful it might be, it’s only there so that she can meet Mr. Right (or Ms. Right, as the case may be). The breakup is rarely the main subject. 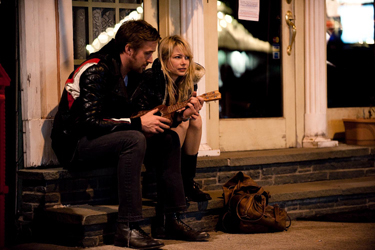 You can understand why too. Most audience members find it a depressing prospect to sit through a film that begins with two people in love and ends with them hurling recriminations at each other. So a lot of recent movies about breakups fiddle with the timeline. François Ozon’s icy 5×2 divides its story into five chunks and places them in reverse chronological order, while Marc Webb’s bittersweet (500) Days of Summer jumps around in time. Derek Cianfrance’s anguished, compassionate Blue Valentine plays a simpler game, intercutting between the stories of a couple first falling in love and that same couple six years later as their marriage decisively flies apart. All these films use the time element to tell their stories in fresh ways, but it’s the one in our theaters this week that hurts the most –– and the best.

In the present day, Dean and Cindy (Ryan Gosling and Michelle Williams) are married, raising a 5-year-old daughter (Faith Wladyka), and constantly fighting with each other. Dean, a housepainter who frequently enjoys a few beers on the job, has treated Cindy to a free weekend at a hotel for couples in a last-ditch attempt to save the marriage. This burst of initiative is atypical for him — Cindy wants more than her job as a nurse, and she’s continually frustrated that her directionless husband offers her no support.

All the animus between them contrasts sharply with the parallel storyline in the past when Dean, a high school dropout working for a moving company, first meets bright-eyed college student Cindy, who dreams of becoming a doctor. Their initial attraction to each other hardens into devotion after she discovers that she’s pregnant by her Neanderthal ex-boyfriend (Mike Vogel). This leads to an excruciating scene in an abortion clinic, when she decides midway through the procedure that she can’t go through with it. There for her, Dean resolves to help raise this child that isn’t his, a sign of maturity that will later prove brutally false. Different as these two halves are, Dean and Cindy’s matrimonial hell always seems like a logical outcome of their earlier blissful young love. The deterioration of their love is reflected in their bodies; present-day Dean is a balding, bespectacled shlub in the making, and both he and Cindy are considerably heavier. (The “past” sequences were filmed first, then production shut down for some months while the actors gained weight.)

The story stubbornly resists any attempt to pin the blame for the breakup on one or the other partner, though the movie will still provoke fierce discussions over everything that goes wrong with this marriage. Dean remains maddeningly childlike as adulthood wears on and can’t see the point of professional ambitions, either Cindy’s or his own. On the other hand, Cindy has some troubling old-fashioned notions about manhood that Dean simply doesn’t fit, and she tries to provoke him into hitting her during a disturbing sex scene in the present day. I can’t help wondering whether these people might have been better off not having the girl, adorable and well-loved though she is.

While all this plays out, the past sequences show you Dean as a sensitive, imaginative kid who’s thoughtful enough to neatly arrange the possessions of an old wheelchair-bound man in a nursing home so that he won’t have to put things away himself. When she busts out some grade-school tap dance moves while he strums the ukulele and sings “You Always Hurt the Ones You Love” (one of a few unsubtle details that only slightly mar this film’s perfection), the simple joy they take in each other’s company is so pure that it’s hard not to think that these two belong together.

Many of the scenes were improvised by the two lead actors, who are as much authors of this film as anyone. They don’t shy away from the unattractive aspects of these characters; Williams nails the disappointment that eats away at Cindy, while Gosling wholly commits to abject moments like when Dean promises to be whatever she wants him to be. That happens during a climactic scene in their kitchen, these two people crying uncontrollably as they end their marriage. These actors are both 30 and have been working in Hollywood since their pre-teen years. That background is supposed to buff an actor’s technique to a high degree of polish, yet Gosling and Williams play their heartbreak with such raw sincerity and emotional vulnerability that they make this scene every bit as horrible as it needs to be.

Cianfrance ends Blue Valentine with a computer-generated fireworks show that lights up images of Dean and Cindy’s younger, better selves. The emotions here should make the film crushing, and yet this strange and wonderful end-credits sequence is a reason why it instead moves your soul and sends you back out into the world sadder, wiser, and grateful for the experience.