The pre-World War II film director Howard Hawks once said that a good movie consisted of three good scenes and no bad ones. Country Strong has two very good scenes and a ton of bad ones. It is, on balance, a bad movie, but it’s a bad movie that I found hard to shrug off because I could so easily imagine the better movie it could have been. 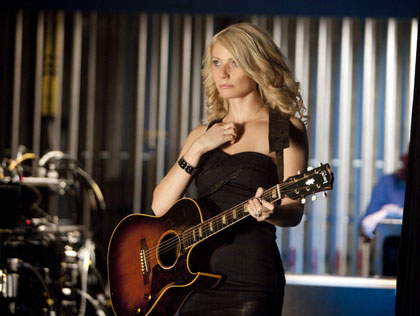 The film begins with country music superstar Kelly Canter (Gwyneth Paltrow) being pulled out of a rehab clinic by her husband and manager James (Tim McGraw, who doesn’t sing during the film but gives a fine performance). About a year after a pregnant Kelly drunkenly fell off a stage during a concert and lost her baby, he needs her to perform three shows in Texas to save her career, culminating in a date at the same Dallas venue where she fell. Kelly insists that her opening act be Bo (Garrett Hedlund, a wooden actor with a nice baritone voice), her rehab sponsor who happens to be an aspiring singer-songwriter paying his dues by playing honkytonks. James agrees even though he correctly suspects that Bo’s sleeping with his wife.

This is just the first complication in a series of incestuous romantic twists that includes Chiles (Leighton Meester), a beauty queen whom James takes along on the tour, thinking she’s the next Carrie Underwood. The meandering pace set by writer-director Shana Feste can’t keep the melodrama from overheating. Nor does she have anything meaningful to say regarding Kelly’s struggles with addiction in the public eye. For obscure reasons, this movie pretends that the internet doesn’t exist, one reason why its portrayal of stardom feels off. Stranger still, the story’s downer ending — not set up nearly well enough — reveals it to be deeply pessimistic about celebrity. Given that the two lead actors have built (as far as we know) solid, stable families while being massively famous, what are we supposed to make of them starring in a movie that tells us that fame destroys your happiness?

Too bad; Paltrow has a great, close-to-the-bone scene when Kelly falls apart in mid-show. She misses her entrance, forgets her lyrics, bursts into tears, talks incoherently to the crowd, sits down on the stage. Finally she manages to get most of the way through a song, hitting the notes more or less while her eyes say, “Somebody help me.” This is what it looks like when a performer has a meltdown in front of an audience, and it rightly makes you feel unclean.

This sets up the other great scene, when Kelly enjoys her final triumph. The mostly original songs here are straight-up Nashville country-pop, and sometimes they evoke Nashville clichés too well. Still, the music is never less than pleasant, and the Paltrow-McGraw duet “Me & Tennessee” over the end credits is unexpectedly haunting. (It’s by Coldplay lead singer and Paltrow’s real-life husband Chris Martin, doing a pretty good job for someone who’s never written a country song before.) The actors here sing well: Meester twangs credibly enough on the romantic lament “Words I Couldn’t Say” and the party song “Summer Girl,” while Paltrow carries herself with a country star’s magnetism on the title song and “Coming Home.” These performances deserved a better film. Listen to the soundtrack, and the movie you construct in your head around these songs will probably be better than Country Strong.