“By now, Seele must be aware of NERV’s ultimate goal.” “That won’t stop us from doing what we must do, even if it means opposing God’s Logos.” I heard that exchange early in the anime film Evangelion: 2.0 (cryptically subtitled You Can (Not) Advance) and thought, “Wow, I don’t understand any of that.” A subtitle translated those words from Japanese into English, and for all the good it did me, it might as well have translated them into Klingon. 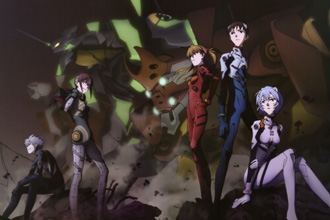 That should tell you that this film is strictly for diehard anime fans and not newcomers like me, but being a conscientious sort, I did some research. The movie is the second part of a four-movie saga remaking the 1995 Japanese TV series Neon Genesis Evangelion. Both versions of the story, wildly popular in their home country, are about a 14-year-old boy named Shinji Ikari growing up in Japan sometime in the near future after an apocalyptic event called “The Second Impact.” With the city of New Tokyo-3 being threatened by destructive aliens called Angels, Shinji is drafted into a paramilitary organization called NERV. His estranged father works there as a scientist building giant fighting machines called Evangelions (Evas for short) that are the only weapons capable of defeating the Angels. Only children born after The Second Impact can operate the Evas, so Shinji is tossed in the deep end as a pilot.

The current movie takes up Shinji (voiced by Megumi Ogata) moving in with Col. Misato Katsuragi (voiced by Kotono Mitsuishi), his commanding officer and legal guardian who acts like a big sister to him. Girls are even more of a foreign territory to Shinji than battling alien robots, and he’s thrown into close contact with a bunch of them in the form of fellow pilots: ghostly blue-haired wallflower Rei Ayanami (voiced by Megumi Hayashibara), bespectacled thrill-seeker Mari Illustrious Makinami (voiced by Maaya Sakamoto), and fiery-tempered half-German Asuka Langley Shikinami (voiced by Yûko Miyamura), with whom he has to share a room.

Among the usual anime hallmarks (the specter of past and future apocalypses, hot nubile young women, environmental concerns, preaching about the values of teamwork, and giant robots beating the crap out of each other), this movie trafficks in Judeo-Christian symbolism and references that often lean toward the obscure. This, along with its meta-commentary on anime itself and the ways its fans relate to it, helps set the movie apart from its fellows.

Enough about all that. What about the giant robots? There’s one glaring misstep when Shinji has to battle an Eva gone berserk with Asuka trapped inside; it’s set to a syrupy Japanese pop song sung by children on the soundtrack, and though juxtapositions like this aren’t unusual in anime, this one doesn’t work. Apart from that, the robot fights offer terrific action and genuine visual splendor. If you’re looking for anything more, like emotional connection with the characters, you won’t get it unless you’re an anime otaku. If you have to ask what an otaku is, you’re not one.

Evangelion: 2.0 You Can (Not) Advance