One of 2010’s most charming movies is I Love You Phillip Morris, the demonic gay bastard child of The Informant! and Brokeback Mountain. This madcap caper film played at the 2009 Sundance Film Festival to rave reviews that, along with the movie’s star power, should have set it up to be a breakout indie hit. Instead, it experienced massive troubles finding its way to theaters, with release dates being repeatedly set and then put off. (This had more to do with an initial distributor’s going broke than with the movie’s homosexual subject matter, though the latter didn’t help.) After so many frustrating delays, this comedy is now at long last out, and it is well worth the wait. 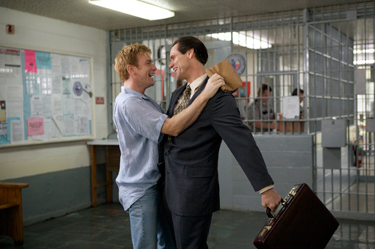 The film is based on a book by Steve McVicker, a Fort Worth native who’s been written about in our pages. It chronicles the amazing true story of Steven Russell, who started out as a church organist and cop in Georgia. He was also a husband and father living a gay double life until a severe car accident inspired him to leave his wife and live openly. Ironically, his honesty about his sexuality coexisted with a pathological lying streak that led him to commit all manner of fraud and embezzling to fund a lavish lifestyle. Russell pulled off his most shameless exploits after he went to prison in Texas in 1995, when he fell in love with a fellow inmate named Phillip Morris (no relation to the similarly named tobacco company) and staged a series of daring nonviolent escapes to be with him. No wonder the film begins with a disclaimer that simply reads, “This really happened. It really did.”

Jim Carrey plays Steven, and at first blush it looks like this will be one of the actor’s patented comic grotesque performances. He flashes his smile Ace Ventura-wide, does a swan dive down an escalator for insurance money, and performs some look-at-me gyrations with his hips during a sex scene. (Carrey must have more sex scenes in this movie than in all his films from the last 10 years combined.) The actor’s lightness jibes well with the character’s rampant amorality.

Yet everything changes when he’s with Phillip (Ewan McGregor), another white-collar criminal whose gentleness and lack of guile brings out Steven’s protective urges in prison. These actors are an unlikely match, but they have incredible chemistry with each other. Steven and Phillip become almost instantly besotted with each other during a whispered initial conversation at the prison’s law library, and the scene is well-played enough to make you hold your breath. Steven’s conscienceless when it comes to stealing people’s money, but love humanizes him and makes him vulnerable. Carrey goes convincingly soft and gooey in these moments, and it’s touching in the context of such an otherwise ferocious performance. This is his best work since Eternal Sunshine of the Spotless Mind.

Finding the right tone is a challenging task not just for the lead actor but also for  rookie directors Glenn Ficarra and John Requa. They’re the screenwriting team best known for penning the obscene, bad-tempered but surprisingly humane Christmas flick Bad Santa, and their work is no less impressive than Carrey’s. They get good help from cinematographer Xavier Pérez Grobet, who cloaks the film in Almodóvar-like candy colors, and from composer Nick Urata, who sets the action to a bouncy Latin jazz beat. With the writer-directors focusing on Steven’s scams, cons, and prison breaks more than his relationships, these elements help set a tone of overall wackiness that fits the criminal hijinks.

Yet relatively early on there’s a powerful scene with Steven bidding a tearful farewell to his terminally ill first boyfriend (Rodrigo Santoro), and somehow the film gives the moment its due without noticeably shifting gears. The human emotions in this story live and breathe without impinging on the comic anarchy. Sometimes they even enhance it; Steven and Phillip’s prison love is funny because the tenderness between them blossoms in such a violent place. At one point, they slow-dance with each other in their shared cell to the sounds of both Johnny Mathis’ “Chances Are” and the guy in the next cell catching a beating from the guards for playing the song on his radio. The moment is typical of the movie’s achievement — it makes you laugh out loud and sigh with romance at the same time.

If you know the particulars of Steven Russell’s story, you know that there’s no happy ending for him and Phillip. The comedy darkens accordingly in the film’s latter third, and the implications of the ending are indeed bleak. All this, though, is part of the film’s complex package of humor and bittersweet romance. I Love You Phillip Morris refuses to conform to the stifling conventions of gay tragedy or gay dating comedy, and in doing so it helps expand our too-narrow notions of what a gay film is. More importantly, it’s an endearing romance wrapped up inside a cheerful criminal romp, an odd and exhilarating experience for us to savor.

I Love You Phillip Morris