Seven years ago, Sylvain Chomet captured the world’s attention with his animated feature film debut The Triplets of Belleville. At the time, many critics including me saw the influence of Jacques Tati, the great mid-20th-century French comedian-director, on Chomet’s work. Their movies are distinguished by their brilliant slapstick set pieces, near-total lack of dialogue, gentle melancholy strain, and ambivalent attitude toward the modern world.

Since then, Chomet apparently has taken the comparison to heart. His long-awaited second movie, The Illusionist (which has nothing to do with the similarly named 2006 film starring Paul Giamatti and Edward Norton) was made from an unpublished screenplay by Tati, secured through the offices of Tati’s surviving daughter. No surprise that The Illusionist is shot through with Tati worship; the main character is named Tatischeff (Tati’s actual surname), and at one point he ducks into a movie theater that’s playing Tati’s Mon Oncle. It’s easy to imagine Tati being embarrassed by this in the afterlife, but surely he’d be beaming with pride at the way his unfinished work has been turned into a film so faithful to his vision. 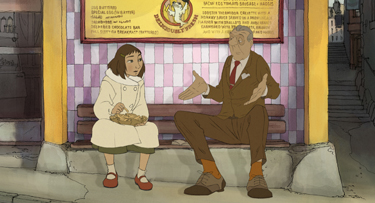 Monsieur Tatischeff (voiced by Jean-Claude Donda) is a tall middle-aged stage magician whose career stalls out in Paris in 1959. He heads to Britain to play to half-empty music halls there. He finds a more appreciative crowd at a pub deep in the Scottish highlands, but more importantly he finds a girl working there named Alice (voiced by Eilidh Rankin) who wants to accompany him on the road because she’s ready to see the world outside her village. They wind up sharing a cozy little flat in Edinburgh, where Tatischeff lands a steady gig at the local hall, though he takes some odd jobs for extra cash. He takes Alice under his wing, but he refuses to grow too attached to her, and when she attracts the attention of a local lad, Tatischeff leaves her to him without much fuss. Much like Tati’s iconic character Monsieur Hulot, Tatischeff is capable of touching acts of kindness but mostly takes the world’s indignities with a resigned sigh and doughty resolve.

The film has already turned some heads by picking up an Oscar nomination for Best Animated Feature, ahead of such high-profile competition as Tangled, Despicable Me and How to Train Your Dragon. It’s not hard to see why. As opposed to his first movie, Chomet here tasks himself with drawing a specific time and place, and he clearly loves using his animation cels to render the Scottish lochs and glens in all their mist-covered glory. His sense of comic timing remains sharp as ever, too, as in a terrific set piece when Tatischeff, working alone as a garage mechanic, tries to figure out how to wash a customer’s giant white American car without any water handy.

That said, this is still a Chomet film, and some of the craziness of The Triplets of Belleville sneaks into the corners of the movie, particularly in the half-crazed rabbit that Tatischeff travels with as part of his stage act. Chomet is a great caricaturist, and he gives us some memorable characters who are only on screen for a few seconds: the eternally drunk, kilt-wearing Scot who invites Tatischeff to play at his village; the lounge singer with a cigarette holder whose shoulders swivel back and forth at impossible angles when she walks; the poncey British rock band that precedes Tatischeff on stage. These are funny to watch, but the entertainers rooming in the hotel where Tatischeff is staying turn out to be rather haunting, including a suicidal clown and a ventriloquist who’s later discovered homeless and drunk on the street, having long since pawned his dummy.

This is all part of the movie’s recurring theme of loss, evoking a world that’s quickly leaving behind Tatischeff and his generation of entertainers in favor of acts like that poncey rock band. This is all captured without bitterness and with those familiar Tatiesque notes of whimsy and sadness. I must confess that in the late scenes when Tatischeff laconically takes leave of both Alice and his show business career, I understood the emotions on an intellectual level more than I felt them. In other words, Chomet missed his target just by a bit. (I should note that other moviegoers feel differently.) Regardless, The Illusionist is a notable homage from one great filmmaker to another. I just hope Chomet’s next movie doesn’t take another seven years, and I hope it’s more his work than someone else’s.