Every band should have a patron saint like the one that watches over alt-Americana outfit Oh Whitney. She lets the band members live in her Fort Worth house, feeds them, and offers constant encouragement while they try to launch full-time music careers. She also happens to be the mother of Oh Whitney lead singer Peter More.

“Her name is Whitney, and six months ago we renamed the band in homage to her,” said lead guitarist Will Arnold, 25. “She provides us room and board. She’s eccentric and artistic and wonderful. We couldn’t do this without her.” 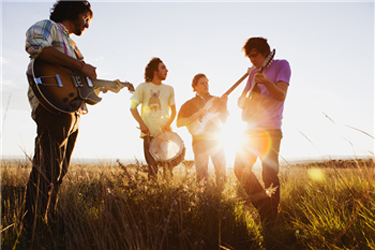 If the lead singer’s mum serving as den mother to the band sounds decidedly un-rock ’n’ roll, the members of Oh Whitney don’t care. They’re far more interested in meticulous musicianship than flashy reputation, as their self-titled debut album reveals. Arnold, More, bassist and singer Peter Holland, and drummer Adrien Faunce play the kind of pop-bred folk-country that Fleet Foxes and Wilco specialize in. But there’s a mischievous bounce and somber beauty to tunes like “Vultures” and “Time Apart” that instantly hook the listener. The album is an assured, joyful, memorable debut.

Arnold, who was born in Los Angeles, and More, a Fort Worth native, met four years ago at Duke University. Arnold studied jazz guitar at a magnet high school in California but gave that up for a major in philosophy and public policy at Duke. He returned to the instrument when he joined a band that included More, an art major, as its vocalist. Arnold and More soon formed their own group, Smooch and the Big Hug, and started playing two- and three-hour sets at campus bars and frat parties in the Durham and Chapel Hill areas of North Carolina.

“Our music was completely different then,” Arnold said. “We had a rapper, and we played rock, but it wasn’t exactly rap-rock. We covered Lou Reed, Bob Dylan, and Outkast. We added some rap lines to Dylan songs.”

While commuting to New York City to play gigs, Arnold and More found an old loft apartment in Brooklyn and moved there in 2008. That’s where they eventually met Holland and Faunce. With the new lineup, their music began to drift toward influences like Wilco, Neil Young, and Jimi Hendrix, whom Arnold has always loved. The new sound was definitely unlike the hipster, shoe-gazey style that dominated the Big Apple’s indie music scene, but Smooch and the Big Hug found an audience thanks to the former Duke students who had relocated to New York and remembered the group’s campus shows.

The band finally recorded its first album last August with famed session drummer Rick Shlosser (Van Morrison, Alice Cooper, Art Garfunkel) as producer at a studio in Queretaro, Mexico, not far from a house owned by More’s family. Soon after that they relocated to Mama Whitney’s Fort Worth digs and rechristened themselves Oh Whitney. Since then, they’ve played dozens of gigs around town, including at Lola’s Saloon and The Where House.

One of the most evocative sounds on the album is provided by an octophone, an eight-string mandolin-like instrument that Arnold, More, and company discovered in a Brooklyn music shop. “It was manufactured in 1927,” Arnold said. “At the time, they advertised it as ‘eight instruments in one’ because you can tune it to sound like a guitar or a mandolin or other instruments. It sounds like a 12-string, with a fuller, shimmery sound.”

Oh Whitney’s debut album will be released on Sat., Feb. 26, and be available on iTunes, CD Baby, and Amazon.com. The band will play a release party in New York, several dates in Durham, and then head back to Texas for some area shows and also, in March in Austin during SXSW, some house parties. After that, Arnold said the band will focus on promoting the new album through Oh Whitney’s web site, the indie-music blogosphere, and social media outlets like Facebook. The assumption that internet marketing should be a snap for people in their 20s isn’t true for this band.

“People tell us it’s more important to establish an online presence than do a tour where we play in front of 15 people in a Nebraska town,” Arnold said. “It’s taken us much longer than it should have to get on MySpace and Facebook because we don’t like to promote ourselves. We’d rather do live shows.”