Who says the life of a theater artist isn’t glamorous? During a recent phone interview, director Robin Armstrong was also busily dyeing several pairs of women’s panties. They’re for one of the actresses in Circle Theatre‘s current production of the 1962 sex farce Boeing-Boeing. Toward the end of our conversation, Armstrong declared victory –– the frilly little unmentionables had achieved the goldenrod yellow color that Armstrong desired. 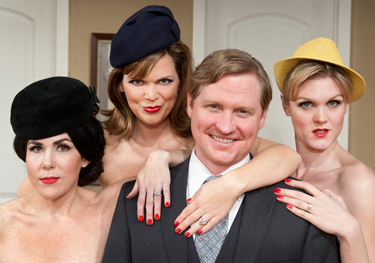 “We have worked very hard to make the show as family-friendly as possible,” said Armstrong of French playwright Marc Camoletti‘s period romp about a caddish architect trying to juggle three sexually assertive fiancées –– all stewardesses or “air hostesses” in the lingo of the time –– on a single night. “There is no profanity and no open sexuality,” Armstrong said, “but there’s one tiny little moment where a bit of a girl’s bottom can be seen. I just want to make sure that the actress doesn’t ‘Sharon Stone’ the audience.”

Boeing-Boeing played for years in London in the ’60s and was revived to become another huge hit on Broadway in 2008. Armstrong has tinkered a little with the English translations by Beverly Cross and Frances Evans. She’s changed the nationality of the charming philanderer (played here by Ashley Wood) from French to English, believing that audiences will more readily accept atrocious behavior delivered with a dapper British accent. The three fetching air hostesses –– one German (Morgan McClure), one Italian (Emily Scott Banks), and one American (Sherry Hopkins) –– have remained pretty much the same, except that Hopkins’ role has been given a Southern belle twist. Curiously, Boeing-Boeing was a big flop when it debuted in America on Broadway in 1965. New York audiences didn’t embrace it until 43 years later.

Speaking of the restrictions of the time, Armstrong, who is also the show’s costume designer, researched not only the tight and revealing air hostess uniforms but also the harsh working conditions of the profession. Women were hired according to weight, height, and figure specifications and had to deal with rampant on-the-job harassment. If they got married, they were instantly let go. For the director as well as for actors McClure, Banks, and Hopkins, all this became a source of major character motivation: As unwitting fiancées to the same man, these women are betting their futures on taking him to the altar. And thriving in a mind-bogglingly sexist industry meant they had to be tough, disciplined, and know exactly what they wanted. Armstrong thinks that being a woman director helps ensure that these characters are not just giggly, bubble-headed eye candy. (“Woe betide the person who gets in their way” is how Armstrong put it.)

The script for Boeing-Boeing doesn’t describe in detail the kind of thwarted kisses, slapstick embraces, and manic exits and entrances that the play’s central complication requires. Armstrong and her cast devised most of the physical comedy through rehearsal, which means if the audience laughs, “it belongs to us,” she said. Given the current stories of draconian government budget cuts, protesting public workers, and violent Middle Eastern revolutions that dominate the news, she thinks theatergoers might be especially primed for a bit of naughty, fine-tuned escapism. She takes her work as a director of comedies very seriously –– Boeing-Boeing is the sixth humorous script she’s directed for Circle. She makes sure to attend multiple performances of a show’s run to see when theatergoers laugh and when they don’t.

“Hearing that laughter is three-fourths of my remuneration,” she said. “When they don’t think something is funny, I need to figure out why. But when I tell an actor, ‘If you pause for two seconds before saying this, you’ll get a laugh,’ I’m usually right. I don’t know why I know that, but I do. And when I’m right, it’s, like, ‘Yay!’ “