The trailer for Cedar Rapids is edited to make it look like another version of The Hangover, which makes sense because Ed Helms stars in both movies and they’re both comedies about bacchanalian hijinks at a hotel. Tempting as it is to look for massive discrepancies, the two films really are pretty similar. The main difference is that though Cedar Rapids never achieves the crazy highs of The Hangover, it manages to be more grounded in a charming way.

Helms portrays Tim Lippe, a guy who has spent his entire life in the town of Brown Valley, Wis., working for a company called Brown Star Insurance — a name to conjure with, surely. However, when his firm’s lead salesman (an uncredited Thomas Lennon) dies of autoerotic asphyxiation, Tim is dispatched to the big insurance convention in Iowa to reclaim Brown Star’s good name by winning the Two Diamond Award given to the region’s best and most morally upstanding insurance agency. 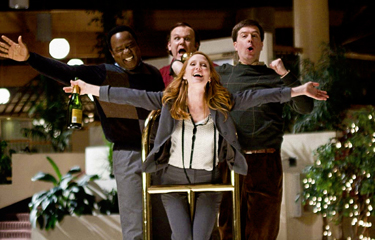 Much of the humor comes from Tim’s being such a rube that Cedar Rapids looks to him like a glamorous, bustling metropolis. He’s legitimately blown away by his bright red Chevy Cobalt rental car and the junior executive hotel suite that he’s sharing with two other conventioneers. Upon seeing his hotel’s indoor swimming pool, he gushes, “They’ve got palm trees here! Everything smells like chlorine! It’s like I’m in Barbados or somewhere!” Surely even small-town insurance agents aren’t this unhip.

I wish Tim didn’t spend so much of the film being such a stick in the mud and a prude. (“Pardon my French, but you are completely full of bullroar!”) The role handicaps Helms, who gives mostly the same performance that many other skilled comic actors — say, Steve Carell — would have given. He does it pretty well, but Tim’s squareness only takes flight in one scene, when he’s drafted into singing at the insurance convention’s talent show and turns in a full-throated rendition of a Christmas carol with his own lyrics. (“O holy night / Costly premiums have them pining. / Term life has robbed them of all they are worth.”) It’s the only time the movie really lets Helms be Helms.

Fortunately, Tim’s suitemates are on hand to school him in the finer points of conventioneering: Ronald Wilkes (Isiah Whitlock Jr.), a Minnesotan who’s as straitlaced as Tim but more comfortable in his own skin, and Dean “Deanzie” Ziegler (John C. Reilly), a blustery, hard-drinking, free-swearing Wisconsinite who knows that he comes off as a bit much. Rounding out the posse is Joan Ostrowski-Fox (Anne Heche), a Nebraska agent who’s just as rowdy and randy as the guys. These supporting actors all hail from the Midwest and intimately know the character types that they’re portraying. The interplay among them is finely tuned.

Whitlock Jr. spends most of his screen time reacting stoically to his high-energy co-stars, but he gets a splendid showcase scene late in the film that contains a priceless reference to The Wire. (Ronald is a huge fan of the TV show, though he seems not to have noticed the resemblance between himself and the actor portraying Clay Davis.) Reilly manages the difficult task of being funny as a character who thinks he’s much funnier than he actually is. It’s no surprise that he wins a huge share of the laughs, but you may be surprised at Heche, who has never been given a comedic role like this one and makes the most of it. Drop-dead sexy, she nevertheless locates the sadness in the part of a married mother of two who seems to live only for these road trips that allow her to smoke, drink, and have sex with other people.

Phil Johnston’s script has a feel for these characters’ cheesy jokes (“My Lippes are sealed!”), though many of its quotable lines offer a more inspired brand of lunacy (“There’s a separation between religion and insurance. It’s in the Constitution!”). Adding to the fun are some terrifically awkward situations like Tim’s naked encounter in a locker room with the equally naked president in charge of the Two Diamonds (Kurtwood Smith) or his blissfully unaware conversation with a prostitute (Alia Shawkat) and her john as they’re coming out of a hotel room. Director Miguel Arteta is a wizard at small-scale comedies like these, and he brings an impeccable sense of comic timing.

The story turns on Tim discovering corruption in the Two Diamonds and facing a moral dilemma. Though the movie recognizes how small the stakes are and has some fun with that, it also treats Tim’s response to his situation with the right mix of seriousness and humor and finds the value in his plodding earnestness and decency. This light comedy scores its laughs, makes its points, and then hurries its way off the screen. Cedar Rapids ends with Tim flying back to Wisconsin and getting an extra bag of peanuts from the flight attendant. He looks down at the two bags and says to himself with all sincerity, “Awesome!” The movie made me feel the same way.