Jesse Eisenberg has carved out quite the career so far, one made even more impressive by the fact that he has such a tiny, high-pitched voice. Such a voice might constrict the roles offered to an actor, but Eisenberg hasn’t let it stop him from proving himself in comedy, drama, and romance. The animated film Rio gets off to a promising start by casting him as the voice of a neurotically squawking parrot, a role that fits him beautifully. Too bad the movie’s inspiration largely stops there. 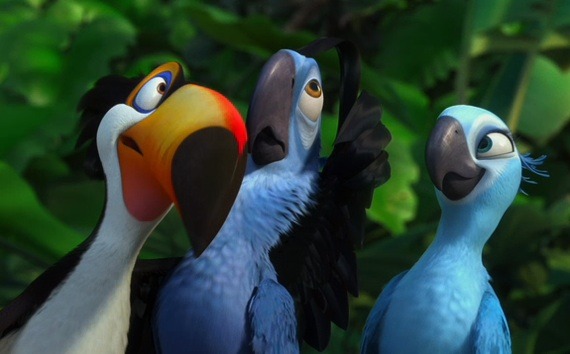 Eisenberg portrays Blu, a macaw who lives comfortably in a bookstore in Minnesota until a Brazilian ornithologist (voiced by Rodrigo Santoro) walks in and recognizes him as the last surviving male of his species. The scientist promptly whisks Blu and his owner (voiced by Leslie Mann) down to his bird sanctuary in Rio de Janeiro to mate Blu with Jewel (voiced by Anne Hathaway), the last surviving female. Before anything can happen between them, a group of exotic pet smugglers breaks into the sanctuary and steals the two critically endangered birds. The parrots and their human caretakers make desperate efforts to reunite, hampered by the inconvenient fact that the sheltered Blu has never learned how to fly.

A Brazilian who made his name directing the Ice Age movies, Carlos Saldanha clearly relishes the chance to set a film in his homeland. The animation lovingly renders the rioting colors of both the wildlife and the city, and the climactic chase sequence takes place amid the splendors of Carnival. Saldanha gives voice cameos to a number of Brazilian music stars (Sérgio Mendes, Gracinha Leporace, and Bebel Gilberto), and the movie’s most thrilling moment comes when Blu gets his first taste of flight (perched on someone’s hang glider), accompanied on the soundtrack by Mendes and Leporace’s soaring version of “Mas Que Nada.”

The problem is the same as with the Ice Age films — these characters are dull. The romantic bickering between Blu and Jewel is predictable in the extreme, and neither the smugglers’ villainous cockatoo (voiced by Jemaine Clement) nor the native birds that help Blu and Jewel survive on the streets of Rio (voiced by George Lopez, Jamie Foxx, and will.i.am) add much to the proceedings. The voice work is generally slack, too, even if Tracy Morgan — used sparingly, thank God — scores some laughs as a slobbering bulldog.

The movie also seems unsure as to whether it’s a musical. There are songs, but they’re so infrequent that they seem out of place when they do pop up. The various tunesmiths working on these songs make them feel like they come from different movies, and they vary in quality as much as tone. Clement co-writes a comic aria for his own character that falls flat, and I really could have done without will.i.am’s contribution, “Hot Wings (I Wanna Party).” The soundtrack, like the rest of the movie, is disjointed, which is part of the reason Rio makes the same impression as the chattering of a hyperactive parrot, occasionally amusing but more often irritating.