Even though it has a bigger budget and higher production values than most of the entries at the Sundance Film Festival, the historical legal drama The Conspirator is still Robert Redford’s first independent film as a director (out of eight that he’s done overall). Inevitably, there’s talk about the former Hollywood leading man and Oscar-winning filmmaker moving in a new direction. In reality, Redford hasn’t gone anywhere. Hollywood has moved away from him, and the indies toward him.


Fifteen years ago, this movie would have received the full big-money prestige-picture treatment and probably been released during the height of awards season. Now the industry regards an intelligent period drama like this as catering to a niche market, so Redford has made it on a relatively skimpy $20 million. It’s a shame, because the movie’s missing a key ingredient that greater resources might have provided. On the other hand, this historical drama speaks to the present moment, so it’s good to have in any form. 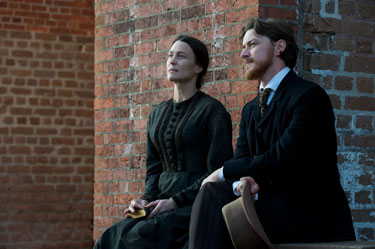 The film picks up in April 1865 with the assassination of President Abraham Lincoln, accompanied by simultaneous unsuccessful attempts on the lives of the vice president and secretary of state. With John Wilkes Booth’s co-conspirators and casual acquaintances alike being thrown in jail, a neophyte lawyer named Frederick Aiken (James McAvoy) is shoved into the furor. He’s called on by his political mentor (Tom Wilkinson) to defend accused traitor Mary Surratt (Robin Wright), a Virginia boardinghouse owner whose now-fugitive son (Johnny Simmons) was one of Booth’s friends. A Confederate sympathizer, Mrs. Surratt is neither the most cooperative client nor sorry that Lincoln is dead, and her new lawyer, a wounded Union veteran, is initially content to let her hang. Yet he’s riled into fighting for her when he sees how eager the prosecution is to trample on his client, who appears to be guilty only of being her son’s mother.

It’s hard to ignore the parallel between these historical events and today’s, especially with the current White House willing to deprive the alleged 9/11 conspirators of their rights to a fair trial. So you may be surprised to find that screenwriter James D. Solomon started working on it back in 1993. Aiken is fired less by sympathy for Mary Surratt than by his belief in due process and the rights of the accused, while Secretary of War Edwin Stanton (Kevin Kline) casts a Cheneyesque figure over a prosecution that keeps changing the rules to its own benefit. As a commentary on the violence that we’ve done to our own concepts of civil liberties, The Conspirator is far easier to take than Redford’s previous film, the hectoring 2007 talkfest Lions for Lambs.

What’s missing here is an underlying sense of mass panic. We’re constantly told that the president’s assassination has stoked public fears of anarchy, a flare-up of the recently concluded war, and the idea that the conspirators could become a rallying point for the Confederates, who might invade and topple a leaderless government. There’s good historical reason to believe all that was in the air in Washington in 1865, yet the movie never makes us feel it. We know Redford can conjure up that feeling — his 1994 drama Quiz Show (his best movie as a director, by the way) thrust its characters into the middle of a public uproar and made us feel the glare of the spotlight that they were under. Here, the director may have been constrained by a budget that didn’t allow for big crowd scenes. Still, there were other ways to suggest a prosecution being driven by a lynch-mob mentality. Because that’s absent, the movie never feels quite as big and powerful as it’s meant to.

Thoughtful and well-built though it is, the movie would degenerate into a dry exercise if it weren’t for McAvoy. The Scotsman’s intelligence and orneriness, hidden behind his wiry frame and delicate good looks, make him a good fit for the role of an underdog hero. Mary Surratt is an abstract figure of suffering, and the other characters are rather flimsy,  even   though they’re well cast (Evan Rachel Wood as Mrs. Surratt’s daughter, Justin Long as Aiken’s hard-drinking war buddy, Jonathan Groff as an unctuous prosecution witness). It’s Aiken who gets to be dynamic as he sees how she’s being railroaded. McAvoy makes the character’s moral outrage into something tensile and cunning, as Aiken resorts to gambits, appeals, and quibbling over the smallest points in an attempt to throw a wrench into the wheels of an unfair justice system. His decency and resourcefulness in the face of a rigged proceeding shine through The Conspirator, and at a time when two successive presidential administrations have run roughshod over people’s rights in the name of a war on terror, this film pays tribute to the unsung lawyers, bureaucrats, and watchdogs who have stood in the way to protect the rights of people who need them the most.