Fort Worth artist Richie Budd is accustomed to all kinds of unusual reactions to his sculptural installations and so-called “performative sculptures.” But his favorite response so far may be from a New York blogger who took to the web to denounce a recent collaboration between Budd and a friend, former Denton artist Will Robison, called “Come On Guy.” Displayed last month at the SCOPE New York art fair in New York City, the installation consisted of four very real New Jersey frat guys hooting, hollering, and drinking a lot of “Natty Light” –– Natural Light was actually a corporate sponsor –– inside a glass case. 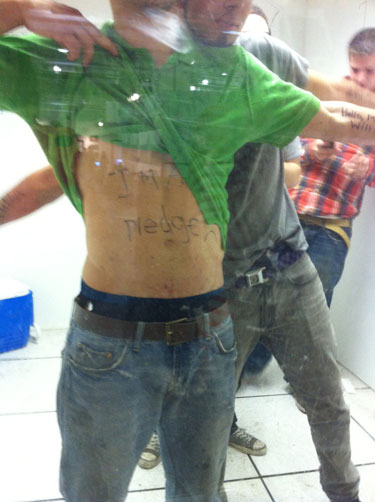 “Art is horseshit,” the offended blogger fumed. “I can put four idiots in a glass box and call it art. I actually wouldn’t mind being in a glass box to rage at an art festival. How can anyone that is involved in art think any of it is legitimate?” Kind of a sweeping denunciation, to be sure, but one that Budd nonetheless appreciates.

“I loved that,” said the artist, 35, with a chuckle. “It’s better than the usual backslapping. At least criticism gives you something to work with.”

An alumnus of Denton’s Good/Bad Art Collective and a graduate of both the University of North Texas and University of Texas-San Antonio, Budd has received quite a bit of backslapping praise from Texas and New York critics for his oddball performance sculptures, which often deal with the relationship between technology and human sensory perception. He’s done other stunt-driven pieces a la “Come On Guy,” including an exhibit of his wisdom teeth perched horizontally on thin pedestals in a work called “All I Have to Give” –– it’s currently on display at his solo show at San Antonio’s Unit B Gallery. His “Diner Coupon” at a 2009 show in Dallas was a mounted series of 20 I.O.U.s, each printed with a generic photo of Budd’s earnest face. The presumption is that these rather dry, clerical vouchers can be cashed in, at some point, for something a little artier from the artist.

“I hope my art has a sense of humor,” Budd said. But to concentrate solely on the cheeky stuff is to miss some of his more sophisticated work, which combines intellectual and emotional elements in surprisingly vivid ways. Budd has done a striking series of sculptures using home appliances, medical devices, and white plastic resin that are oddly poignant. One, “Whiteout,” features a walker in a pile with calculators, tubes, and other flotsam partially covered with drippy plastic resin –– the resin mounds resemble some kinds of creatures trying to emerge from larval states. An interactive installation at a 2009 San Antonio show was called “Exposing Liminal Homeostasis” and consisted of a vertical industrial assemblage of mirrors, spotlights, speakers, a smoke machine, aromatherapy devices, a margarita maker, and recordings of Budd’s voice repeating Buddhist sutras and self-help affirmations. Viewers were bombarded by all kinds of sensory messages being emitted by this spindly, segmented, robotic monstrosity that appeared almost desperately eager to please.

“I rode in the cockpit on opening night,” said Budd, referring to an attached seat on the sculpture from which he could operate various controls. “I wanted it to be a Wizard of Oz, man-behind-the-curtain kind of effect.”

Budd is taking a hiatus from art-making and doing intensive reading in areas that interest him. He’s fascinated right now by method and process, so he’s reading everything from cookbooks to the Greek-Armenian mystic George Gurdjieff’s massive 1950 tome Beelzebub’s Tales to His Grandson, which attempts through a convoluted allegory to help the reader separate reality from illusion. Given the apparently random ideas and objects that go into Budd’s “performative sculptures,” it’s difficult to pin down obvious influences in his work. Budd acknowledges that there are plenty of artists he admires, but he’s not much into idolizing other creative types. In this sense, the collaborative nature of Denton’s Good/Bad Art Collective has left a permanent stamp on him.

“My biggest influences are my friends, the artists who work with me,” he said. “Art is a symbiotic process. You get ideas from working with other people.”