Before I saw the needlessly subtitled Hoodwinked Too! Hood vs. Evil, I watched the original Hoodwinked, the animated film that came out way back in 2005. Though I still appreciated the ingeniousness of its flashback structure, I was surprised by how dated it was. That’s what happens when you substitute ephemeral pop-culture references for solid jokes. I suspect a similar fate will befall the sequel. 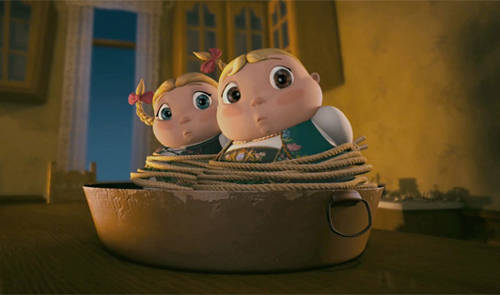 Most of the original’s cast is back: The secret-recipe-protecting Granny (voiced by Glenn Close), the not-so-big and not-so-bad Wolf (voiced by Patrick Warburton), and the amped-up squirrel Twitchy (voiced by Cory Edwards) have all gone to work for a government security agency that battles the bad guys of the fairy tale world. The new agents’ latest mission is to foil a witch (voiced by Joan Cusack) before she eats Hansel and Gretel (voiced by Bill Hader and Amy Poehler). There’s dissension in the ranks, though, as Wolf shockingly prefers to work alone and is none too pleased with being paired up with by-the-book Red (voiced by Hayden Panettiere, replacing Anne Hathaway from the original).

As with the original, the best stuff here is on the margins of the story; a straightforward scene with Red and Wolf walking down a city street has at least five sight gags unfurling one by one behind them. The Three Little Pigs (voiced by Cheech Marin, Tommy Chong, and Phil LaMarr) are a nice addition as evil minions with a grudge against Wolf, and the singing, banjo-picking goat from the original (voiced by Benjy Gaither) is here made into a victim of a string of cosmic accidents caused by the shenanigans in the main story. The fast-talking Twitchy remains a funny character, and the original songs include an R&B slow jam written brilliantly from a squirrel’s point of view. We hear that song coming from the stereo when Twitchy is entertaining two female squirrels — somehow it just makes sense that Twitchy turns out to be a player.

Sadly, the animation remains substandard, and the relationship between Red and Granny — whose legendary crime-fighting exploits Red struggles to live up to — remains uninteresting. The big set piece with Red and Wolf confronting the mob boss-like giant from Jack and the Beanstalk (voiced by Brad Garrett) is ineptly handled. The script still relies heavily on tired pop-culture references. (How tired? “Use the Force, Luke” gets an airing here.) Like the original, the sequel pulls a switch regarding the identity of the real bad guy, but it doesn’t work nearly as well this time.

None of this makes Hoodwinked Too! exactly unpleasant to sit through. The pace doesn’t bog down until the very end, and a few more of the jokes here hit home than in the other animated family films currently out. Still, this fractured fairy tale evaporates as soon as the end credits roll. If a third installment comes out six years from now, we’re going to have even more trouble remembering where we left off.

Hoodwinked Too! Hood vs. Evil