It’s a chestnut, but it does bear repeating: Sometimes getting there first matters most. The comic-book satire Super reaches us about a year after Kick-Ass did, and it definitely comes off looking late to the superhero costume party. That’s too bad, because while it’s a considerably flawed piece of work, it’s still worth a look. 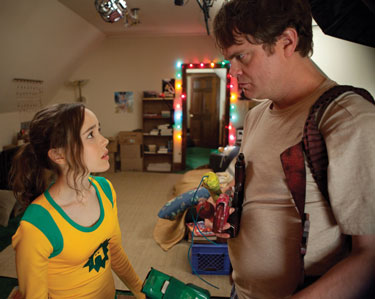 Frank D’Arbo (Rainn Wilson) is a short-order cook who’s married to Sarah (Liv Tyler), a sweet but massively screwed-up drug addict who sees him as her personal bastion of stability. When she relapses, though, she leaves him for Jacques (Kevin Bacon), a dirtbag strip-club owner and drug dealer with his own retinue of armed thugs who give Frank a serious beating when he tries to take Sarah back. Feeling bereft and impotent, Frank has a religious vision one night that inspires him to dress up like a masked comic-book superhero and call himself The Crimson Bolt. Without any superpowers, he uses a pipe wrench to dispense the same sort of vigilante justice to both child molesters and people who cut in line at the movie theater, each time delivering his catchphrase, “Shut up, crime!”

The lead performance doesn’t clarify matters. With his sloe eyes that frequently house a freakily intense stare, Wilson makes a perfectly good weird guy in the background of the action, as he does on TV’s The Office. On the evidence we have (namely this movie and the starkly different comedy The Rocker), he’s not cut out for lead roles. When a pre-vision Frank kneels and weepingly prays to God for guidance, Wilson doesn’t have the depth to portray a soul in torment. Instead, he disastrously tries to play the scene for laughs. We never feel his attachment to Sarah or the emptiness that drives Frank to take justice into his own hands.

Fortunately, there’s Ellen Page — oh, is there ever Ellen Page — as Libby, a clerk in a comic book store who cottons on to Frank’s secret identity and asks him, “Is it you?” with evil mischief and more than a hint of sexual arousal dancing in her eyes. Soon Libby is dressing herself as a catsuited sidekick for The Crimson Bolt and calling herself Boltie. Page shows off her flair for physical comedy in a scene in which she auditions for the sidekick role by executing a series of woefully uncoordinated cartwheels and karate kicks. Far more memorable, though, is the raw sexual aggression that she invests in the role, especially when Libby puts the moves on Frank even though she has little idea how to do it. When the bloodshed starts in earnest, Libby gets fully in touch with her inner psychopath, and Page expresses it with a disturbing habit of laughing maniacally at the bad guys as they’re being maimed and killed. It’s hard to be sexy, scary, and funny all at the same time, but Page pulls it off with flying comic-book colors. She’s volatile and deeply frightening here in a way that she’s never been onscreen, not even in Hard Candy. She seems to have mainlined the demonic spirit behind Gunn’s violent revenge fantasy. Too bad Super isn’t a better vehicle for her character.