Everyone seems surprised that Kenneth Branagh is directing Thor. Well, I’m not. True, he made his name directing and starring in a string of cinematic Shakespeare adaptations in the 1990s, but his love for the classics always coexisted with a similar love for middlebrow entertainment: David Lean epics, TV sitcoms, film noir thrillers, Errol Flynn swashbucklers. These influenced his Shakespeare movies and helped make them cool to an entire generation. So a blockbuster action thriller based on a comic book seems just the place for him. The clunky and overstuffed result isn’t as much fun as the Iron Man movies, but it’s better than The Incredible Hulk and a worthy entry in the fast-growing Avengers series. 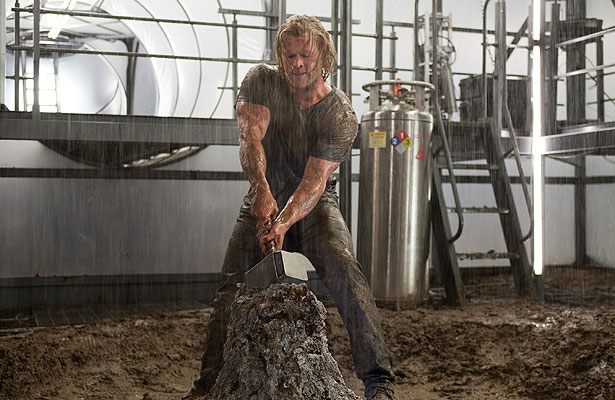 The action picks up in Asgard, the realm of the Norse gods, where the gods’ king, Odin, (Anthony Hopkins) is about to pass on the crown to his son Thor (Chris Hemsworth). However, when Thor’s arrogance and lust for battle almost touch off a war with another realm, Odin punishes him by casting him out of Asgard onto Earth. He lands in the desert in New Mexico, where only Jane Foster (Natalie Portman), an astronomer who saw him fall from the sky, believes Thor’s stories about being a god from a parallel universe.

The movie tends to be at its weakest when it’s on Earth. Thor’s integration into the overall series is merely nodded at. The romance between Thor and Jane is flat. Portman seems practically undirected, unsure of how to play her character, a strange lapse given how much care the director usually takes with actors. The film is at times funny (usually because of a chipper Kat Dennings as Jane’s wisecracking intern), but Branagh’s touch with slapstick comedy remains as subtle as Thor’s hammer.

Branagh’s much more at home with the Oedipal drama going on in Asgard, with Hopkins seeming rejuvenated by the director’s presence. The schemes of Thor’s brother Loki (Tom Hiddleston) are cleverly pulled off — anyone with a passing knowledge of Norse mythology knows that Loki is untrustworthy, yet it’s still instructive to see him simultaneously convince Thor that he’s his best ally and pose as the voice of reason for the benefit of Odin and the other gods. The climactic fight sequence between Thor and Loki is poorly executed, but the other action scenes are much better, especially when Thor, robbed of his godlike powers but still strong, rips through government agents in an attempt to retrieve his hammer. Hemsworth, last seen as Captain Kirk’s dad in Star Trek, does well with the chastened Thor that we see late in the film. Elements like these and the director’s zest for the job help bring this superhero flick home successfully, despite a few bumps along the way.