There has been talk of Fort Worth getting a new rodeo arena for decades now, to take over those duties from the beloved but outmoded Will Roger Coliseum that hosts the main events of the Fort Worth Stock Show and Rodeo and other equestrian events during the year. Built in 1936, the coliseum seats about 6,000 people.


But the Fort Worth powers that be — especially local billionaire Ed Bass — have been quite secretive concerning specifics about the proposed new arena. While most think it will be built near Montgomery Street and Harley Avenue, no specific site has been identified. No design plans have been made public, and no one outside of the Bass loop even knows what the seating capacity might be. 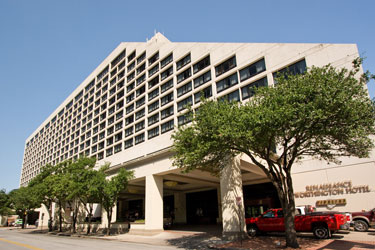 And then there is the issue of who will pay for it. Proponents want the city to be on the hook an unspecified amount of the cost, which could be half or more of a price tag that some observers predict will come in at more than $200 million. The most likely scenario has the city floating bonds in excess of $100 million, which would have to be approved by voters in a citywide election.

But even though no plans have been approved or made public, that hasn’t prevented the arena proponents from seeking public tax money for the project. The latest was an attempt to change state law to allow certain cities to raise their hotel tax from a state limit of 15 percent to 18 percent. The added three percent could be used only for “an approved venue project a significant use of which is for rodeos, livestock shows, equestrian events, agricultural expositions, county fairs, or similar events.” What’s more, when the convoluted description of what cities the bill would cover is deciphered, it turns out that only one city would be affected: Fort Worth.

The bill was filed by Fort Worth State Rep. Charlie Geren in March. No one in the hotel industry — from the Fort Worth Convention and Visitors Bureau to local hotel operators to city staff and council members — was consulted prior to the filing. When an Austin hotel lobbyist discovered the bill, local hoteliers were alerted, and most were livid. Geren then pulled the bill, in mid-April.

“I understand that [the hotel tax increase bill] was not part of the city’s state legislative program and was not subject to discussion by the city council’s Legislative and Intergovernmental Affairs Committee,” said Fort Worth Assistant City Manager Fernando Costa. “I understand that city staff may have attended one or more meetings involving the Fort Worth Convention and Visitors Bureau, local hotel representatives, and the bill’s supporters after the bill was introduced, but the city staff’s role in those meetings was merely to observe the discussion.”

Geren defended his bill. “We have to find a way to improve the stock show facilities, and I thought that the increase in tourism that would come from that would be a good way to pay for [the improvements,]” he said. “But when we saw the opposition to the tax increase, I decided not to pursue it this time around. Bills get filed and pulled. That happens in the legislature all the time.”

Under the Texas Constitution, state laws cannot be targeted at individual cities — at least not by name. But legislators get around that by creative use of language. In this case, the bill applied to any city that has a population of 700,000 or more, located in a county with more than one million in population, and adjacent to a county with more than two million. Fort Worth is the only city in Texas that satisfies that criteria.

“The plans for the rodeo arena have been so secretive,” said a longtime tourism consultant who did not want his name used. The rodeo arena “is a huge project for this city in terms of funding, and no one can get any answers.”

As for not consulting with local tourism officials prior to filing, Geren said, “They have their lobbyists down in Austin who keep track of bills affecting the hotel industry, so it wasn’t like were trying to sneak something through.”

Julie Faver-Dylla, executive director of the Hotel Association of Tarrant County, said such a tax increase would “have a very negative effect on the tourist industry in Fort Worth. Texas has the highest hotel tax in the country, and Fort Worth would be the highest in the state.”

Under the current 15 percent rate, a $200 basic hotel room rate ends up costing guests $230 when taxes are added. If the 18 percent rate were applied, the figure would rise to $236. Budget planners in Austin estimated the three percent increase would generate an additional $2 million a year for “livestock facilities venues.”

“It may not seem like a big increase,” Faver-Dylla said, “but [the raising of the hotel tax] would have a detrimental effect on the tourism industry in Fort Worth. And no one could show us any economic benefit. Hoteliers, especially downtown, have always said they see little business from the stock show. So this notion that they should pay for stock show improvements made little sense to those in the hotel industry.”

Stock show officials’ role in pushing the bill is murky. Events Facilities Fort Worth Inc., a nonprofit organization that works closely with the stock show nonprofit, has been the lead local agent on getting a new rodeo arena. In its latest Internal Revenue Service tax filings, Events Facilities listed $45 million in net assets. Ed Bass is chairman of the board, and Mike Groomer is executive director, with an annual salary of $250,000.

Geren said that Events Facilities “was not any part of the bill, either before I filed or after.” However, when the local tourism officials found out about Geren’s bill, they scheduled a meeting at the Renaissance Worthington Hotel in late March to get details. Groomer made the presentation.

“We asked [Groomer] at the meeting to provide us with some numbers that would estimate the economic impact, and he could not give us any information,” Faver-Dylla said. “They couldn’t give us any reasoning for it.”

Texas hotel industry leaders expect arena advocates to try again in the future. And they had no problem identifying Events Facilities as the leading advocate.

“The proponents of this legislation [have] committed to working with the area lodging operators on this issue over the next two years,” said Scott Joslove, president and CEO of the Austin-based Texas Hotel and Lodging Association. “They indicated their goal is to find a funding solution that will allow the redevelopment of the Will Rogers Memorial Center … without problematic additional [costs to] the local hotel industry.”

Will Geren file a similar bill during the next legislative session?

“Call me in two years, and maybe I’ll have an answer for you,” he said.