A new band is on the run. A specific kind of Beatles parody outfit, The Boobles recently released their debut album, a 35-minute jaunt that has been more than two years in the making. With 11 tracks, versions of The Fab Four’s songs to honor boobs, The Pink Album is dedicated to the women in each Booble’s life.


Underneath the titty-faced masks that greet you on the album cover is a group of mostly Fort Worth guys using their musical talents and comedy skills to support a not-so-funny cause: breast cancer research. All proceeds from the sale of The Pink Album go toward the Breast Cancer Research Foundation, the leading nonprofit organization in the field. 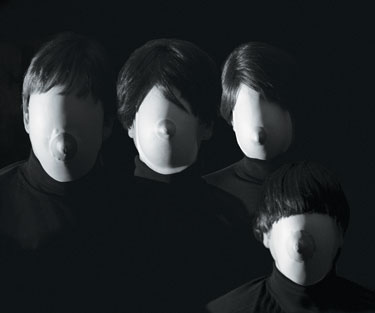 The mastermind behind it all, 41-year-old Eric Tomme, got the idea the same way many of us do our best thinking: while dozing off at work. Growing up listening to Dr. Demento, Tomme became interested in novelty songs at an early age. He later started making up some of his own parodies and trying them out on unsuspecting crowds at local karaoke bars. “It gave me an outlet for all the stupid ideas in my head all the time,” he said.

In 2007, Tomme happened to be going through a Beatles phase, wearing only one earphone so his boss at his land title company wouldn’t notice, and The Boobles lyrics just started pouring out of his head. Rather than make a compilation of unrelated Beatles parodies, he decided to create a breast-related concept charity album. There is a special place in his heart for breast cancer research: His mother-in-law is a survivor.

After seeing multi-instrumentalist “Big Mike” Richardson play an incredible set at the Flying Saucer downtown one evening, Tomme got the courage to pitch his idea to Richardson, who immediately jumped on board, set to play bass, guitar, and piano, and with a little help from his new friend, Tomme rounded up the rest of the band members. Drummer Brad Swinger from the local Beatles tribute act Hard Nights Day agreed to join the band, as well as guitarist Rodney Bollinger and singer Pete Sacco, both from Me and My Monkey, another local Beatles tribute group.

Not surprisingly, The Boobles sound eerily a lot like, well, you know who. The local guys don’t just know how to play The Beatles music — they know The Beatles sound and the Liverpool lads’ mannerisms and performance tendencies. In the studio, Swinger insisted on having his drum kit set up unusually, just like Ringo’s, and during a piano piece, Richardson played a slightly wrong chord (to Tomme’s surprise), only because McCartney made the same slip.

The Boobles cover all life stages of breasts, in fact. “You’re Growing Boobs Now, Girl” (“You’re Going to Lose that Girl”) tells of a father’s unfamiliarity with a new chapter in his daughter’s life. “My Baby Mama” (“Lady Madonna”) is a husband’s delight in his wife’s ballooning bosom, and “Wear a Bra” (“Drive My Car”) warns of breasts “succumbing to gravity.”

The album wraps up with the eight-and-half-minute “Fake Boobs” (“Hey, Jude”), describing a surgical transformation from pancakes to peaks. “Take a flat chest, and make it bigger / Extend your mosquito bites into jugs / Make friendly hugs feel so much better.”

The instrumental aspect of The Pink Album is close to flawless, which is expected. While some of the lyrics may be a little repetitive or tacky, the album as a whole works as a truly light-hearted affair.

The album may seem like all fun and games, but it actually was a serious labor of love. The Pink Album was recorded in a home studio built by Tomme and his friend Glenn Milam and mixed by the same duo. Conflicting band schedules extended the process. But it was all worth it, Tomme said. “It’s about doing something with what you’ve got that will help your fellow wo­-man.”

For folks easily offended or who take life too seriously, this album isn’t for you. But if having a little laugh for a good cause is up your alley, then visit The Boobles’ website, www.theboobles.org, for more information.