If you’ve never seen Gilbert and Sullivan’s The Mikado, you may be a little shocked by Fort Worth Opera’s version, which premiered Sat., May 14, in Bass Performance Hall and will be reprised this Sunday and also on Fri., May 27, and Sat., Jun. 4. There’s little English operetta here. Instead, FWO’s The Mikado, though based on the original stage piece, is a high-tech Broadway-style romp. Opening the company’s fifth annual festival, the show was about as far out as it could be without blowing up the theater. To reflect the expanded view, maybe the title should have been changed to The Mikado: The Musical.


The traditional Japanese setting has been replaced by a youthful, contemporary fantasia. The back wall was illuminated by Versa TUBE, a lighting system that comprises 175 one-meter-long horizontal tubes and was originally created for arena rock concerts. A mix of visual images –– none ever seen before in opera –– was specially developed for the production. Looking back at the audience from the top of the stage was a giant QWERTY computer keyboard with Japanese characters, and the members of the opening men’s chorus entered singing, “We are gentlemen of Japan,” sporting black business suits while busily working smartphones. 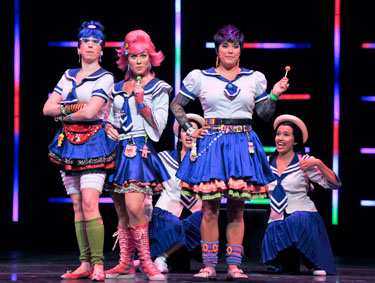 The guys were done one better by the seminary girls, arriving in mini-skirted sailor suits and toting Hello Kitty backpacks. The heroine, Yum-Yum (the lovely Jessica Cates), wore ruffled knickers under her skirt and a curled, pink wig that looked as if it started life as a mop. (Lady Gaga would be envious.) The Mikado, or emperor (baritone Matthew Young), and flamboyant villainess Katisha (the hilarious Meaghan Deiter) showed up on Segways, another quirky sight gag among many during the evening.

The facetiousness fits comfortably within the Gilbert and Sullivan tradition of poking fun at just about everything. Certainly, the flimsy plots are mainly excuses to generate laughter. In this case, the Mikado’s son, Nanki-Poo (the engaging Logan Rucker), flees his father’s court to escape the conniving Katisha, who has convinced the Mikado that she should marry his son. Wandering the countryside dressed like a punk rocker, Nanki-Poo meets Yum-Yum, and they fall in love. But she is affianced to Ko-Ko (baritone Lane Johnson), the Lord High Executioner. The story meanders down countless such byways before resolving into happily ever after.

Topical lyrics, often added by companies to the executioner’s list of people who won’t be missed if they end up on the business end of his sword, were not neglected. A sample new verse:

The OWN Network is endlessly pretentious in its mirth

And when she does, she’ll crush us all beneath her iron fist

I’d best cease and desist, or I’ll end up on her list

The cast, full of mostly young, emerging talent, was sharp, and the principals responded with energy and style to director John de los Santos’ snappy staging. The voices were miked to help project the spoken dialogue, which precludes any real commentary about the quality of the voices. After a slow start with the overture, conductor Joe Illick kept the Fort Worth Symphony moving at a lively clip and, along with the singers, earned a sustained ovation. FWO’s production of The Mikado may not be to everyone’s taste, but the audience here was certainly turned on.

Thru June 5 at Bass Performance Hall,

(inside the Fort Worth Community Arts Center),