If any Shakespearean character deserves to be rediscovered by contemporary audiences, it’s Rosalind from As You Like It (probably written in the year 1600). Literary critics and amateur bardolators alike have long been infatuated with her. In Shakespeare: The Invention of the Human, Harold Bloom wrote, “Falling in love with Rosalind makes me wish that she existed in our sub-literary realm.” The character, the daughter of an exiled duke, is a wisecracking philosopher who wanders fearlessly through the forest dressed as a boy. After catching the eye of Orlando, an athletic young nobleman who’s her equal in neither class nor intelligence, she slyly schools him in the ways of life and romance. She does not finally consent to love him until he understands the complexities of both. 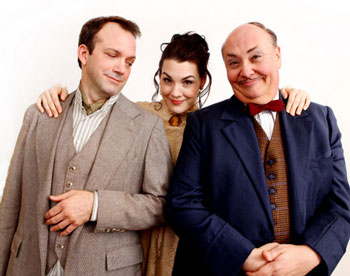 TCU’s Trinity Shakespeare Festival has enlisted Trisha Miller to play Rosalind in its current production of As You Like It, led by artistic director T.J. Walsh. Miller won high praise for her performance as Beatrice in last year’s Much Ado About Nothing at Trinity, and she’s been working with the festival since its inception in 2009. Currently based in Portland, Ore., Miller lived in Dallas from 2005 to ’08, during which time she performed in shows at top Fort Worth theaters such as Circle and Stage West. She is thrilled, and a little daunted, to tackle Rosalind, whom Miller describes as “a miracle of a role –– Rosalind is very smart, infectiously optimistic, down to earth, generous, resilient, curious, sincere, and savvy.”

Shakespeare, Miller noted, gave Rosalind more lines than any other female character he wrote. “She’s also got a wicked sense of humor,” she said. “She’s in love, but she sees how awkward and absurd it is to completely give herself over to another person. She criticizes love from the inside. If I don’t completely screw it up, I hope audiences will be charmed by her.”

Miller, 34, performed the role back in the 1990s in a graduate-school classical repertory program at Wayne State University in Detroit. Miller has since divided her performing time between contemporary and classical material. The latter, she says, requires more preparation –– aside from investigating the history of the period and researching words and references she doesn’t understand, she frequently makes a chart of the complicated relationships in the plays and sometimes keeps it backstage. When all that prep work leads to a well-received performance, it’s even more satisfying for her.

As You Like It –– and especially the character of Rosalind –– have been particularly ripe for interpretation by feminist and queer studies scholars, because of her boyish drag, her assertiveness and cool self-control, and, in particular, the scene in which she, as her male alter-ego Ganymede, endeavors to take her would-be lover Orlando through the motions of courtship. Miller said director Walsh tends to guide his actors to find the truthful moments in the play and not let “actory nonsense” or too much contemporary spin intrude. When trying to deliver Shakespeare, Miller prefers working with directors who aren’t overly conceptual.

“I think so much of the play is already about identity and layers of illusion,” she said. “I had a [male] friend in graduate school who played Rosalind in an all-male version [of the show]. And even then, he didn’t spend a lot of time trying to figure out how he should play a woman. He tried to find what he already had in common with the character.”

As You Like It is performed in repertory with Macbeth at the 2011 Trinity Shakespeare Festival. Miller will also play Lady Macduff in the Scottish play. As Shakespeare fans know, that character’s relatively brief appearance in the play nonetheless offers one of the most shocking scenes. Miller won’t divulge any details, but she says that Walsh has created a particularly inventive staging for Lady MacDuff’s big, bloody moment in the spotlight. Miller chuckled as she contemplated the emotional extremes of the two shows.

“As You Like It takes place in this paradise, this wonderful natural setting, and Macbeth is set in an earthly hell,” she said. “It really takes a huge mind-shift to go from one show to the next. But I see repertory as the Olympic games for actors. It’s the greatest training in the world, and you never get bored.”