I read somewhere that Elmore Leonard goes to diners just to listen to people talk, and that’s the main reason why I don’t feel bad about passively eavesdropping whenever I go to bars. Of course it doesn’t hurt that I’m easily distracted, and tuning out ambient voices just isn’t something I have ever been good at. 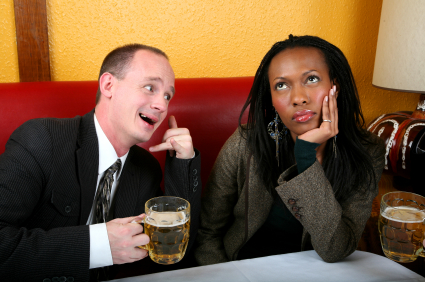 What makes listening to people in bars fascinating to me are the sonic coincidences that complement whatever a person is saying at a given moment — if you’re thinking in narrative terms, the sounds you hear in the bar often turn out to be diegetic, crucial to the story of your evening. For example, last Wednesday, I hit up the Bulldog Saloon to hang out with a friend who was tending bar. She had two regulars holding down the fort, one of whom had loaded the juke with Springsteen. The guy started going on about how he’d seen the Boss about a million times in the ’70s and ’80s, rolling out factoids and trivia that sent my gaze drifting to the TV in the corner. A closed-captioned Leno was interviewing Parks and Recreations’ Aubrey Plaza. Leno and Aubrey cracked each other up in exuberant silence. I think I like Leno like this; I don’t know if he’s any funnier with the audio off, but his mugging and shifting provide a visual backdrop similar in effect to a tank full of hungry goldfish — momentarily captivating but easy to ignore.

On the edge of my hearing, the dude started to compare the old way of buying Springsteen tickets (which involved waiting in line at a department store) versus modern event lotteries. His lecture made me wish I could afford to buy Justin Bieber tickets and scalp them to middle-aged women in Southlake. I tuned back in as he was wrapping up. “It was easier back then,” he said.

As if on cue, “Born to Run” segued into “My Generation.” The Who’s famous jingle drove home the sad, coincidental relevance of this guy’s trip down Memory Lane (and “Thunder Road”) and my own inability to follow. It was one of those ineffable moments that everyone has in which living is simultaneously exultant and depressing. I wondered what bar I’d be in 20 years from now, talking about how things used to be. Above me, Leno soundlessly introduced his next guest, an old lady with horrible highlights and a frighteningly botoxed face, draped in what Joan Collins would’ve worn if there’d been an episode of Dynasty set in Middle Earth. I ordered another drink. The dude nodded up to the TV. “Saw Aerosmith a bunch of times, too,” he said. That’s when I realized the person on TV was Steven Tyler. I resolved that when I’m old, I’m just gonna be old. –– Steve Steward

Speaking of eavesdropping, I overheard a dude at the Shamrock talking about a new lounge he was opening. I waited for a lull in his convo with some women at the end of the bar and started hounding him. Turns out that Wired Willy’s is set to open this month in the spot between Poag Mahone’s and 7th Haven on Carroll. I asked the owner, a retiree from the Santa Fe Railroad named Randal Wilcox, what the hook of his new bar was. He said that there’ll be 20 beers on tap, half of which will be from Texas — he rattled off the names of Rahr, Real, Franconia, and, of course, Shiner, but hopefully we’ll get to see some of Austin-based Jester King’s heavy brews.

“The other thing we’re doing is kind of risky,” he said, “We’re going to be a no-smoking bar.” I assured him that his clean-air standards should be a hit, given that every time I’ve been in The Usual lately, the crowd has been pretty thick despite the absence of a yellow nicotine haze. If you’ve been clamoring for another bar that won’t leave you smelling like an ashtray, drop some coin at Wired Willy’s when it opens — and prove to the rest of the bar owners in Fort Worth that you can keep an establishment’s doors open without polluting its air. –– S.S.