The votes are in. All 10 million of them. Just kidding. We’re talking about only a few thousand here. Close to 10. But still only a few. Yep, all of the votes in our 14th or 15th Annual Fort Worth Weekly Music Awards have been counted (thanks, Dana; thanks, technology), and we have our winners. 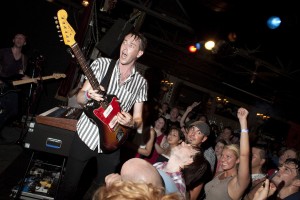 But uh-uh-uh-uh. Not so fast, chief. We’re not just gonna give ’em to you in this here middling column space. Rather, you’ve got a couple of ways to find out which Fort Worth bands, solo artists, songs, albums, venues, record labels, and producers are the best in the world. And, yes, we got votes from all over the globe (thanks, Big Brother, uh, I mean, Google Analytics). Way No. 1: Pick up the paper next week, Wed., Jul. 13 –– all of the winners will be listed, and resident Weekly bloviator and my alter-ego, Anthony Mariani, might talk a little (key phrase: “a little”) about each victor, though he’s not going to get into spreads. That’s for politics and sports. We don’t want to foment hatred among local musicians based on a couple of votes, because, in some instances, a couple of votes was all that separated winners from runners-up. What will be important to mention, however, is that even some runners-up received hundreds of votes, which has to make any second- or third-placer feel all warm and fuzzy inside. And based on my conversations with vote-counter Dana, I can say that Fort Worth music has a lot of fans. Nearly 10,000 votes, remember? From all over the world, dig? Pretty cool. Anyway –– I’m rambling –– to find out who won, pick up the paper next week or engage in Way No. 2: Cancel your Sunday night plans or get a sitter and, at 8 p.m., materialize at the Capital Bar (3017 Morton St., W. 7th Street corridor, 817-820-0049) for our 2011 Music Awards Ceremony After-Party. Onstage will be an all-star jam led by the improv jazz outfit Gunga Galunga — saxophonist Jeff Dazey (Josh Weathers & The True+Endeavors, EPIC RUINS, Dazey Chain), drummer Lucas White (The Missile Men, Rivercrest Yacht Club), bassist John Shook (James Hinkle, Dirty Pool), and DJ Database –– and featuring guest performances by members of such vaunted local outfits as EPIC RUINS, The Hanna Barbarians, Spoonfed Tribe, Quaker City Night Hawks, and The Villain Vanguard, to name just a few. Like the Music Awards Festival every year, the Ceremony After-Party is free. Between (or during) performances, you’ll be able to chat up some of the local musicians in the house, who will have just come from the private, nominees-only awards ceremony. Some may be bearing Panthies — that’s the name of the little panther-head trophies that we give to the winners (panthers in honor of Fort Worth’s nickname of Panther City). So that’s Sunday, the Cap Bar, 8 p.m., free, all-star jam with dudes from EPIC RUINS, Josh Weathers, The HBs, Quaker City, Spoonfed, VV, and more. Thanks for all your support. See you there.