For 30 years now, one of the most ambitious and popular extracurricular programs at Texas Christian University has been the annual Piano Texas International Academy and Festival. Every year, the intensive month-long music camp brings dozens of students from around the world to work with a guest faculty of notable teachers and performers. A series of solo recitals, open to the public, culminates in two concerts with the Fort Worth Symphony Orchestra, featuring six students selected as the best of the year.


The students have their pick of dozens of concert instruments on loan from such esteemed companies as Steinway (Hamburg and American), Bechstein, Bösendorfer, and Yamaha. (This year, the Bösendorfer sold in Dallas three days before the festival began, so the company wasn’t represented.)

Only a handful of outsiders found their way to Ed Landreth Auditorium and PepsiCo Recital Hall to hear the musical feast that ended last week, and that’s a shame, for there were some exciting concerts. For the festival’s 30th celebration, founder and director Tamás Ungár decided to focus on Beethoven, and eight well-known pianists were invited to divvy up the composer’s 32 piano sonatas for a series of recitals that gave a rare opportunity to experience the maestro’s remarkable output. 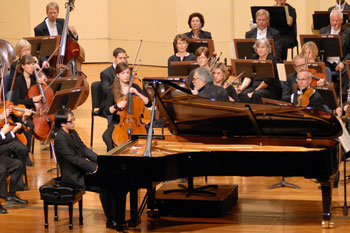 The last two performers, Paul Badura-Skoda and Adam Golka, couldn’t have been more different. Badura-Skoda, at 83 an elder statesman of the piano, charged into the music with amazing energy. Playing the first sonata, Op. 2 in F minor, and the last, the mighty Op. 111 in C minor, he occasionally tripped during the rapid octave passages, and he annoyingly let go of notes too soon at the ends of phrases. He also approached everything with the same intensity and enormous sound, making no concessions to style or the keyboard possibilities of the delicate 1795 fortepiano on which Beethoven started out and the stronger Broadwood grand that he favored nearly 30 years later. For Badura-Skoda’s performance, he had selected a Bechstein piano. The sound never blurred, no matter how much was demanded of it.

Golka found more poetry in the music. A prodigy who began studies at TCU when he was 15, Golka is now 24 and has shed his youthful aura and developed into a thoughtful musical artist. He played the Fifth and Sixth sonatas with warm, loving care on the house Steinway. He also tackled the hefty “Hammerklavier” Sonata Op.106. Though Golka is still finding his way through the musical cosmos in which Beethoven wanders in the slow movement, the young man’s instincts remain amazingly ahead of his years.

Last year’s student soloists with the FWSO were judged in a mini-competition, but this year the chosen six were all named best of the summer and did not compete. Regardless, the performances were energetic and passionate.

Surprisingly, only four of the five Beethoven piano concertos were performed. For some reason, the Fourth didn’t make it, and the First and Third were repeated. Regular conductor Miguel Harth-Bedoya led the FWSO in the opening program, featuring Yuchong Wu of China, at 15, the youngest of the soloists. He performed the First Piano Concerto, exhibiting extraordinary technique –– much like all of the soloists –– and enormous enthusiasm, which got the better of him in the first movement cadenza. He sounded more like Tchaikovsky than Beethoven. The rest of the concerto rang true and left me in awe of his accomplishments.

Not to be outdone was 17-year-old Chelsea Wang from West Des Moines, Iowa, who played the Second Piano Concerto with stylish phrasing and, in the slow movement, lovely, limpid sound. Yon-joon Yoon, 18, of Korea, the last of the teenage soloists, performed the Third Concerto with nice articulation in the outer movements, but his sound tended to disappear in the largo section.

Two student pianists returned from 2010: Cheng Zhang of China, who was ranked first, and Anna Bulkina of Russia, who placed second. They played on the final FWSO orchestral program, conducted this time by veteran pianist Leon Fleisher, whose acclaimed piano career was interrupted by a hand disability in the ’60s. (He turned to conducting, with much success, and recently regained the use of his right hand. He now wears both hats.) Last year, the now-21-year-old Zhang gave a transcendent performance of the Beethoven Fourth Piano Concerto, a unique performance at any age. This time he chose the monumental Fifth Concerto, and the outer movements were brilliantly realized. However, he is still working on making the slow movement his own.

Last year, Bulkina gave us a mature reading of the Schumann A Minor Concerto, and the 24-year-old, the oldest of the soloists, was equally compelling this time, playing the Beethoven Third Piano Concerto, although she, too, had trouble projecting the slow middle movement.

Completing the program was 21-year-old Jiayan Sun of China, who gave a good account of the First Piano Concerto, including a charming, playful last movement.

The number of Asian students reflects director Ungár’s globe-trotting participation as a staff member in several international piano workshops, including ones in Bolzano, Budapest, Prague, Vienna, and Germany. This fall, he’ll return to Beijing and direct the piano institute that he founded for the Chinese government
in 2006.