The area north of I-20 and Little Road in Arlington isn’t exactly known as a destination for exotic non-chain restaurants. That’s why Lotus Café is a welcome addition to the neighborhood. Though the food may not be the most exciting thing you’ve ever eaten, it’s a nice departure from all the burgers and pizza dominating the area.

The new Vietnamese restaurant looks very strip-mall polished and glossy, unlike its older cousins in Haltom City (or, for that matter, in Southeast Arlington). The menu features classic Vietnamese fare (bánh mì sandwiches, pho, vermicelli bowls) and, perhaps in a nod to the location, a bunch of fried Cajun offerings and po-boy sandwiches. In a roundabout way, that makes sense. The French colonized Vietnam, and the French Arcadians settled in Louisiana to produce things like crawfish-tail po-boys. Right? Or maybe the menu suffers from its creators’ desire to please the palates of people who think that neighboring Pizza Hut is the real Italian deal. 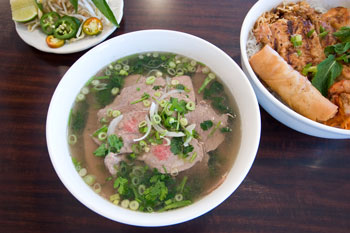 For those folks, perhaps making their first venture into Asian food, the walls are lined helpfully with glossy posters showing the food, along with the English and Vietnamese names. Order at the counter, and someone will bring your food to your table. The dishes are brought out as soon as they’re ready, without regard to ordering sequence.

The chicken potsticker appetizer featured six fried objects that looked like empanadas. Though not offensive, the chopped chicken had no discernible spice save for pepper. The Saigon roasted shrimp spring rolls were an improvement. The halved shrimp, vermicelli noodles, crunchy cucumbers, and soft rice wrapper were lovely. However, the pork stuffed inside looked –– and tasted –– like Spam. I was told it was “liver pâté.” But the Spam –– er, liver –– was easily removed, and the peanut sauce was absolutely divine. Big chunks of peanut added texture to this savory, slightly spicier-than-average version of the sauce. The roasted pork spring rolls were the tastiest apps of the bunch. The meat actually looked like meat and came wrapped in an inner blanket of lettuce with cucumber.

Bun, the fish sauce-augmented bowl of vermicelli and veggies, is a traditional staple, and there are 12 varieties from which to choose at Lotus Café. The char-grilled chicken version featured slightly rubbery but well-seasoned chicken atop supremely fresh noodles, beautiful lettuce, cucumbers, carrots, and lots of peanuts. The sauce was excellent, and the fresh bite of the veggies more than made up for the fact that the chicken was likely pre-cooked and reheated to speed up the meal prep.

All bánh mì sammies come out on New Orleans-style rolls, not the traditional crusty French baguette. Still, the portion size was generous, and the sandwiches were slathered in a spicy Vietnamese mayo, along with crunchy pickled daikon, carrots, and cucumbers. The Warrior is identified on the menu as the “meat lover’s special” and named after a nearby high school’s mascot. Lots of cold cuts, including roast pork, steamed pork, and more of that pâté, were piled high on the soft bread. The non-traditional bun worked well as a vehicle for more of that scrumptious peanut sauce from the appetizer.

Your time won’t be wasted by venturing to Lotus Café just to try a boba tea or slushy: super-sweetened milkshake-like beverages. I’ve sampled Lotus’ Thai tea, coffee frappuccino (strong enough to wake the dead), and green milk tea so far, and they’re all addictively good. Add deliciously non-mushy boba or chopped lychee, and you have yourself a nice dessert beverage.