Stage West’s current production of David Mamet’s acidic political comedy November is the fourth show directed by Dana Schultes, who serves as the company’s director of development. She is, of course, well known to Fort Worth audiences for her performances in many Stage West productions over the years, most recently the critical and commercial hit Talking Pictures back in the spring. Schultes said her forays into directing have made her much easier to work with as an actor: She now has sympathy for choices made by directors that once seemed contradictory or impulsive.

“A lot of times actors will get frustrated in rehearsals because a director tells them something the first week and then completely contradicts that during week two,” she said. “Now I realize it’s because something isn’t working and has to be fixed. The director is the one sitting there seeing the whole picture. That’s where trust between the actor and director comes in.” 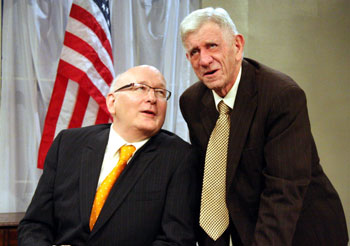 With November, Schultes finds herself not just directing Stage West founder Jerry Russell and artistic director Jim Covault in the lead roles but also interpreting the dialogue of an American playwright notorious for the tricky rhythms of his language. The play concerns a corrupt U.S. president (Russell) trying to hang onto power as his re-election campaign sputters. Both his acerbic chief of staff (Covault) and his idealistic speech writer (Sherry Jo Ward) are more or less resigned to the man’s defeat, but he refuses to surrender without attempting a desperate publicity stunt to improve his plummeting poll numbers.

November is relatively light and friendly fare coming from a playwright who relishes exploring the venal and predatory sides of human nature –– Schultes describes the show as “South Park meets The West Wing.” The script is nevertheless peppered with Mamet’s customary profanity and his very precise signposts to speaking the dialogue that include dashes, italics, and specially timed interruptions. Schultes, who’d never tackled Mamet before, was a little surprised just how much of a difference his persnickety language instructions made.

“He puts ideas into the script through italics and punctuation, so it was a process of constantly going back and checking how it looked on the page,” she said. “We’d find a period we didn’t catch after one word and then a light-bulb would go off: ‘That’s why he’s supposed to say it that way.’ The rhythms of the dialogue solved a lot of the problems in the rehearsal process.”

November is, for the most part, an equal opportunity satire –– neither the political left nor right is singled out for special drubbing. But since the show was first produced on Broadway in 2008, Mamet has reinvented himself as a conservative talking head, loudly complaining about everything from public funding of the arts to what he sees as the silly utopianism and anti-capitalist attitudes of American liberals. Needless to say, his coming out of the closet as a right-winger has not been embraced by the lefty theater crowd. Schultes is the soul of diplomacy in describing her own reaction.

“I think everyone does everything they do for a reason,” she said. “Right now, it’s working for Mamet to be attacking the [National Endowment of the Arts]. But I just concentrated on the script, which I think people from both sides of the political spectrum can appreciate.”

A few minutes later, she confessed to being an NPR junkie and a big fan of The Daily Show and The Colbert Report. “People would say I obviously lean to the left,” she said. “But whenever actors and writers get into politics, it feels a little self-serving to me.”

Right now, Schultes is less concerned about perceived political agendas than with helping audiences see that November is more than an extended SNL skit about lying, greedy politicians. She thinks the show has much more heart than previous productions may have revealed, and she wanted to capture it in Stage West’s current version. In the show, the president’s speechwriter declares that what matters most is for people of all political persuasions to regard one another first as fellow Americans. The character insists that we’re far less divided when we deal with one another one on one.

“Mamet referred to this play as his love letter to the American people,” she said. “If you’re willing to listen a little harder through the ‘fucks’ and ‘shits’ and the satirical bite, you’ll find another layer to it.”