With the Near South Side’s recent emergence as a hip destination, you’ve got to wonder how many people remember the area anchored by Magnolia Avenue before the boom. Not so long ago, the Chat Room Pub and Benito’s restaurant were pretty much the only watering holes. Now there’s a bunch of places for quenching your thirst, and a multi-stage music venue (Live Oak) and a brewpub (Zio Carlo) are on the way. Like the existing bars and bar/restaurants on the Near South Side, the new establishments are independently owned. No chains. No big Dallas companies. Still, does anyone wonder if the rise in popularity will lead to prohibitive rent and kill off the pre-boom joints? 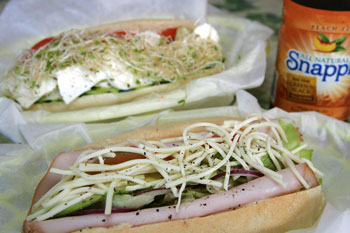 All of which makes this a great time to visit a Near Southside veteran that is still doing well. Hoagies, Sandwiches Etc. is easy to miss, but the little shop has been perched on the corner of Magnolia and 7th avenues for more than 17 years. An unpretentious, modest enterprise, Hoagies doesn’t have the bells and whistles of a Which Wich? or the reliability of a Quizno’s or Subway (Hoagies’ only apparent competition for Hospital-District sandwich lovers). Despite the building’s nondescript appearance, the food at Hoagies has way more character than your average sandwich chain.

Speaking of institutions, you might recognize the owners of Hoagies as the folks behind the now-defunct Ho Ho Chinese Cuisine on Park Place, where Esperanza’s Mexican Bakery and Café has operated for the last couple of years. “Ho Hos,” as it was affectionately known, was a rather dark and dingy family restaurant that specialized in a particular brand of deep-fried –– and deeply unhealthy –– Chinese food, the kind created for those of us who don’t know any better. Rest assured, Hoagies is far more inviting than its old sister restaurant.

So how does Hoagies, Sandwiches Etc. stack up? For starters, there’s an extensive list of sandwiches filled with meat or seafood: 16 cold and five hot subs, plus a BLT, Reuben, and hot pastrami on rye. Breads include white, pita, rye, multi-grain, and croissant, in 4-inch, 6-inch, and foot-long sizes.

Stuffed with roast beef, ham, turkey, and Genoa salami, the Super sub is rightly Hoagies’ most popular item. It might not be the most health-conscious option, but its four-meat punch is a winning combination of salty and savory. The avocado-and-turkey sub is more middle-of-the-road, saved by some creamy Italian dressing. And at Hoagies, going with anything vaguely decadent is probably the safest choice. The basic subs –– even the old standbys –– yield less reliable results. In the case of the meatball sub, the “meat” tasted more like tofu. The stringy Swiss cheese, standard on many of the sandwiches, might as well have been plain ol’ American.

Though Hoagies offers only three vegetarian subs, it does a lot with a little. Most veggie subs are boring and often no different from their meat-based counterparts (except for, well, the meat). But Hoagies has found a simple solution: Offer some unique ingredients. In addition to the usual suspects (lettuce, tomato, onion), the California sub features avocado and alfalfa sprouts, and the Cool sub has pecans and cucumber dressing.

Like the meat subs, the “Etc.” implied in the restaurant’s title can be hit-or-miss. Take the spaghetti with shrimp. The shrimp were fresh and plump, but the insipid, watery, bright red, and flavorless Ragú-like sauce was uncalled-for. The no-frills Greek salad is easy on the wallet but failed the taste test –– there wasn’t any.

Though the menu lists unexpected items like gyros and Thai salad, you’re probably better off scampering over to nearby King Tut or Junsuree if you’re jonesing for those. But kudos to Hoagies for trying.

Among a current crop of trendy Magnolia eateries that includes Cat City Grill, Ellerbe Fine Foods, Lili’s Bistro, Nonna Tata, and Shaw’s Burgers & Shakes, Hoagies, Sandwiches Etc. is a veritable elder statesman. While it’s not the area’s greatest hole-in-the-wall, the place offers reasonably priced and often tasty fare and presents enough surprises to keep you away from the chains.