I find myself becoming more and more impatient with these comedies about married dads pining for their younger, carefree bachelor days. Don’t get me wrong: I totally understand men in that situation wondering about the road not taken and perhaps feeling the occasional twinge of regret. That’s not the case with the middle-aged main characters of Shrek Forever After, Grown Ups, Hall Pass, and now this week’s The Change-Up.


Their desire to be free of their adult responsibilities has soaked depressingly through every fiber of their beings. Yeah, if your single days were so awesome, why’d you get married in the first place? Furthermore, these comedies always have to end with the dad learning that his new married life is better than single life, but none of these movies makes that case with any conviction. (If you want a film that does that job successfully, you have to go all the way back to It’s a Wonderful Life.) 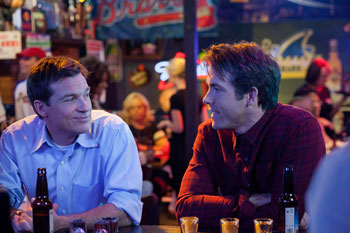 The Change-Up, which to be fair is loads better than the execrable Hall Pass or Grown Ups, gives us this story and throws in a body-switching ploy . Striving workaholic lawyer Dave (Jason Bateman) neglects his wife (Leslie Mann) and three kids. Meanwhile, his best friend Mitch (Ryan Reynolds) is a struggling — though not struggling very hard — actor who spends most of his time lying on his couch, smoking weed. As the two buddies relieve themselves in a fountain after a night of drinking, they wish for each other’s lives. When they wake up the next day, they’ve magically been transported inside each other’s bodies.

Having seen Prelude to a Kiss, Face/Off, The Hot Chick, and both versions of Freaky Friday, I’ve never seen two actors convince me that they had indeed switched bodies. I’m not entirely sure why this is. I’ve seen actors elsewhere give amazing impressions of public figures and even of other actors. (Think Cate Blanchett as Katharine Hepburn in The Aviator.) An assignment like this one, though, seems to defeat all comers. Maybe actors find it too distracting to have to imitate another actor’s mannerisms and speech rhythms while that same actor is on the set, busily imitating their own mannerisms. In any event, Bateman is slightly better at impersonating Reynolds than vice versa, but they’re both pretty far off the mark.

They’re valuable to this movie anyway, which squeezes a great deal more comic mileage out of the tired premise than you might expect. Reynolds is an almighty spark plug in the early scenes as the irresponsible Mitch, and even though he’s not much as a Bateman impersonator, his scenes as Dave-in-Mitch’s-body (henceforth referred to as “Ditch”) are notable for his recognition that Dave’s hot paralegal (Olivia Wilde) has a crush on him and for his attempt to repair Dave’s marriage once he realizes how broken it is.

Standard procedure for body-switching films is a simultaneous scream the first time the main characters see each other, so I’m glad that this one just has Mitch-in-Dave’s-body (“Mave”) eyeballing Ditch and tossing off a quiet, “I knew it!” The script is by Jon Lucas and Lester Moore, the writers of the two Hangover movies, and their scatological humor hits home often enough. Near the end, when the two are back in their own bodies, Dave asks Mitch, “Is it weird that I miss your penis?” Mitch smoothly responds, “It’d be weirder if you didn’t.”

Yet for every gag that works there’s at least one that’s just calculated and rancid, like the early bit with Dave’s new baby pooping in his face. Contrast this with Bridesmaids, where the gross-out humor arises organically from the plot and is carried out more skillfully. Ditch discovers the truth about Mitch’s bachelor life at a film shoot (which turns out to be a “lorno” — I’ll let you discover what that means) and during an encounter with one of Mitch’s regular sex partners (Mircea Monroe), about whom Mitch has left out a key piece of information. Those scenes are the movie’s way of deglamorizing single life for Dave, but they’re so extreme that you can’t take them seriously. The way they demean the women involved is off-putting too. As Dave learns the virtues of stopping to smell the proverbial roses while Mitch learns the satisfactions of buckling down and getting things done, the movie’s homilies come to feel mushy and out of place. The Change-Up is still quite funny on occasion. It’s just that there’s better stuff out there that doesn’t leave you feeling queasy.