The Arizona company that makes Tasers, the allegedly “less-lethal” weapons that have killed hundreds of people around the world, has lost another lawsuit. This time a North Carolina jury found Taser International responsible for the death of a 17-year-old store clerk who was hit with the weapon’s 50,000 volts of electricity because he pushed groceries off a counter and threw an umbrella.

In the July 19 verdict, Taser International was ordered to pay $10 million in damages to the family of Darryl Turner. A company spokesman said the verdict will be appealed. 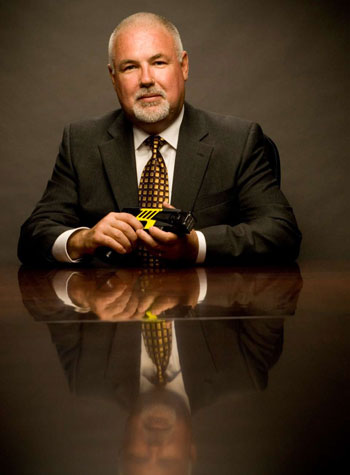 News of the jury decision drew cheers from locals who have fought for years to stop the overuse of the stun guns by police in Fort Worth, where at least five people died after been tasered since 2005.

“It’s not a question of whether or not Tasers will finally be banned, but how much Taser International is going to have to pay for the funerals those weapons cost,” said Rev. Kyev Tatum, president of the Fort Worth chapter of the Southern Christian Leadership Conference.

“In truth, it was a tremendous victory, a nail in the coffin of the use of Tasers,” he said. “And eventually, as those awards mount up against the company, against police departments, and against cities, they’ll be forced out of business.”

Marcus Hardin, whose grandson survived a 40-second tasering three years ago, agreed with Tatum’s assessment. “I give them [Taser International] five years,” he said. “Then they’re done.”

Hardin, with Tatum and Pastor Tom Franklin, founded the Taser Memorial at the New Mount Cavalry Baptist Church in Highland Hills. He said the North Carolina verdict “was a long time coming. Unfortunately, the number of people who have died after being shot with a Taser keeps going up. We’re up to 674 crosses at the memorial — and each represents someone who was tortured to death by a Taser.”

Mark Haney, a Fort Worth civil rights attorney who has worked on Taser cases for years, also praised the Turner verdict. “This adverse judgment is simply further evidence that Taser rushed these products to market without fully appreciating the risks associated with them,” he said.

The victory marked only the second loss Taser International has sustained in a courtroom — but most of the cases filed against the company don’t make it to court. Of the almost 130 lawsuits known to have been filed against the company, all but four were settled out of court. In the four that were decided by juries, Taser International has won two and lost two.

Company spokesmen regularly refer to the out-of-court settlements as though they were all wins for Taser.

John Burton, the California attorney who represented plaintiffs in both of the cases in which Taser went to court and lost, scoffed at that idea.

“One of the cases they put in their win column was a case I handled where they settled for $2.8 million before it came to trial,” he said. “So when they say they’ve won 127 cases, that just means they’ve settled out of court most of the time.”

In the North Carolina case, Turner, known generally as a good worker and excellent student, was working at the Food Lion grocery store in North Charlotte on March 20, 2008, when he was approached by an assistant manager who accused him of eating a microwaved sandwich he hadn’t paid for. Turner admitted the petty theft and was sent home for the day. But he returned after his shift was up, demanding to see the assistant manager, who refused to speak with him.

According to Burton, the young man “then pushed some product” from a counter and “threw an umbrella,” at which point a policeman, who had been called to remove Turner from the store, appeared in the doorway and fired his Taser into Turner’s chest at close range twice, the first time for 37 seconds.

The officer, Jerry Dawson, later said that he held the trigger down so long because Turner did not fall when hit. Dawson, a veteran of 15 years with the Charlotte-Mecklenberg Police Department, then fired at Turner a second time for five seconds. That time, Turner went into shock and died without recovering consciousness.

An autopsy by the Charlotte medical examiner found that Turner died from “acute ventricular dysrhythmia, agitated state, stress, and use of conducted energy weapon device (Taser).” In 2010 the city of Charlotte settled with the Turner family for $625,000, while admitting no culpability.

The $10 million judgment against Taser International came in a separate product-liability suit filed by the family.

Burton said he doesn’t think the company will be able to get off without paying damages the way it did in an earlier case that he and co-counsel Peter Williamson won against the weapon maker in 2008.

After the North Carolina verdict, Taser International released information meant to calm fears of investors in the publicly traded company and of law enforcement agencies that use the electronic weapons. Steve Tuttle, the company’s vice president of communications, said Turner had a condition known as hypertrophic cardiomyopathy (HCM), which is responsible for 39 percent of sudden cardiac arrest deaths in people under 21.

“That was a fully fabricated lie,” said Burton. “The Charlotte medical examiner, Thomas Owens, did the autopsy, and he said Turner had a great heart, free from all pathologies, in top shape. But Taser brought in someone from Harvard, Dr. James Stone, who examined some tissue and declared that Turner had HCM. We sent his findings to one of the world’s leading specialists on HCM, and he agreed with Owens, the ME: The kid simply didn’t have it. No enlarged heart, no thickening of ventrical walls, nothing.”

Tuttle’s release also noted that the jury was not told about three baggies of marijuana that were alleged to have been found on Turner. “Under North Carolina law, if someone has acted in a negligent manner that contributed to their damages, even a one percent contribution, they are barred from recovering damages. … The company’s legal council believe that Mr. Turner’s crimes, including theft, trespassing, drug possession, assault on fellow employees, resisting arrest, and initiation of an apparent assault on a law enforcement officer constitute negligent behavior that necessitated the use of force by police.”

“I read that press release and almost threw up,” said Burton. “This was a great kid. Never arrested, first in his class in high school, had applied for college, had a job at 17, didn’t smoke or drink … . Heck, I talked with the manager of the store, and he told me that Turner was a great worker, always on time, and that he had great potential with the company.

“And when I talked with other employees, they said the assistant manager was always unpleasant and routinely unfair. I mean, he [Turner] had eaten some food he hadn’t paid for — right, a 17-year-old in a supermarket job. And look what Taser makes him out to be.”

Both of the cases that Taser International lost in court were based on the premise that the company knew the weapons could be lethal in certain circumstances but did not warn the police departments and public of that.

Shortly after the first of those two cases was decided, the company added a number of warnings in its product package. After Turner’s death, the company added more language, warning that the weapons should not be fired into the chest near the heart.

Hardin sees the change as Taser International’s attempt to throw all responsibility onto law enforcement personnel. “Now when someone dies, Taser is going to say, ‘You were warned not to use the weapon in the chest area,’ or whatever, and that might get them off the hook.”

Burton agreed. The new warnings, he said, could mean that, when more people die after being hit with Tasers, their families “will be going directly after the police departments … for liability.

“The products, Tasers, are simply a lot more dangerous than the company says they are,” Burton said. “They talk about excited delirium killing all these people, as if everyone who dies after being tasered would have dropped dead in minutes anyway, and that’s just not the case.”