The ominous mood is established by the cover art: a sepia-toned ’20s photo, which seems haphazardly attached to a piece of stained cardboard, depicting a child with a ribbon in her hair descending a staircase. In one hand, she holds a candle; in the other, a pistol. The image’s eerie aura is reflected in the music on the LP inside the sleeve. 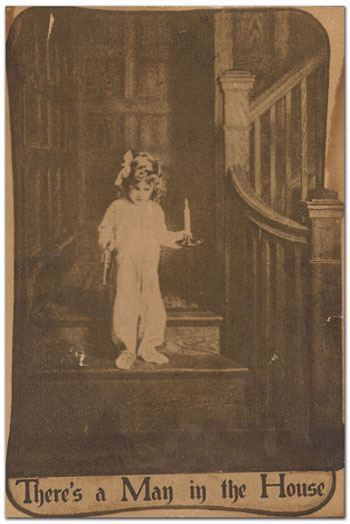 There’s a Man in the House is the debut recording by The Great Tyrant, a Fort Worth trio whose odyssey of restless creativity began in 2005, when vocalist/organist Daron Beck (ex-Pointy Shoe Factory) invited drummer Jon Teague (ex-Yeti) to collaborate, and ended abruptly with bassist Tommy Atkins’ suicide in February 2010. The bandmates worked relentlessly, composing enough material to offer a new live show every six months or so, and they documented everything they wrote together. Though the material on There’s a Man in the House is three years old, it was compiled only recently (vinyl only), by Fort Worth’s Dada Drumming — constant delays in artwork production eventually forced Teague to do the job himself (with assistance from art criminal Ray Liberio of Pussyhouse Propaganda). In concert, The Great Tyrant was quite stunning visually — one observer described the trio as “a vampire backed by two monks” — but was even more so sonically, with Beck’s effects-laden vocals and keyboards spewing dark menace over Atkins and Teague’s roiling rhythms.

The funereal “Almost Dead to Me” opens the album at a pace that would have been appropriate for the soundtrack to a black mass in a ’50s-era Hammer horror film, and Beck demonstrates how expressive he can be when he’s not trying to sound like a monster. “There’s a Man in the House” builds tension with a repeated dissonant chord before the rhythm section gradually works its way into a thumping modified boogie. “Adorable” juxtaposes a hypnotic Atkins ostinato with an Elvin Jones-inspired groove from Teague, over which Beck practically rants, giving way to a lighter-sounding interlude that’s reminiscent of the ’70s European prog bands that Yeti idolized.

“Stay Away” winds its way through several movements, showcasing the rhythm section’s precisely controlled violence underneath Beck’s most dramatic vocal performance here. “Bearing Teeth” explodes in a frenzy of rumbling bass, clattering drums, and swirling organ, with banshee wails from an unhinged Beck. Three years ago, “Still Birth” sounded like a stately valedictory with a closing that’s actually uplifting; in light of what’s happened since, it now feels like a farewell to Atkins.

Following their friend’s death, Beck and Teague resumed writing and performing almost immediately, scrapping The Great Tyrant name and adopting the rubric Pinkish Black. The new sound is different, much less obsidian, but equally orchestral and haunting. There’s still another album’s worth of Tyrant music to be released but not before the premiere Pinkish Black recordings come out at some point early next year.