This one time, my friend and I were comparing stories about growing up in our respective youth ministries, laughing at the absurdities, the ironies, and about this dude we knew who allegedly got a hand job on a Young Life bus trip. “Why isn’t there a place where you can get together with people and talk about life that isn’t a church?” my friend asked.


“There is,” I replied in avuncular fashion. “They’re called bars.”

That conversation came back to me a couple weeks ago, around the time a Southwest Airlines pilot got in trouble for leaving his mic on and bitching about old people. It was a Wednesday, and I’d been cruising around, starting at Lola’s and sort of drifting farther and farther south until I was sort of headed to Wedgwood. I think I meant to end up at Keys Lounge, but by the time I found myself passing Charley’s Hamburgers on Granbury Road, I figured I’d just wander until I hit Bryant Irvin Road and camp out at Woody’s or something. Passing under I-20, I saw what looked like a Pizza Hut but with a neon sign beaming lower-cased letters from in its mansard roof. “Yep,” I said to myself. “Guess I’m going to Yupp’s.” 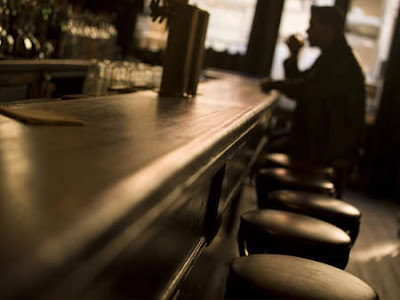 When I parked, I was struck by the architectural juxtaposition of Yupp’s squat brown walls and the dated, beneficent glow of its sign against the ominous dominion of its neighbor to the south, the soaring white wall of LifeChurch.tv. Both enterprises are essentially organized around fellowship and community, and both rely on your charity to pay their employees. You can probably guess which congregation I prefer. I ducked into the sanctuary where they sell beer.

Yupp’s interior is about what you’d expect from a dive near a freeway. Poorly lit. Just the way I like it. The seats are covered in this dark red upholstery that practically saps the color from the neon beer signs. If I were less sensible, I’d go so far as to say that there’s some primal magic at work here, some kind of psychic vibration that’s dangerous if recklessly tapped.

I don’t think that ever happens, because Yupp’s is evidently a karaoke mecca. Except on Wednesdays, I guess. Indeed, the only thing going on during my visit was a muted broadcast of Access Hollywood on one TV and closed-captioned local news on another. Since it was just me and the bartender, I ordered a draft and shot the breeze.

She and I talked shop, mainly about customer dipshittery, and also about her divorce and how her regulars include the late-night shift change at the police storefront on the other side of the shopping center. She also told me how she just didn’t really like a lot of people, which I took with a grain of salt since she seemed to get on just fine with me and the four or five other people who slowly materialized. I gathered they were regulars, and she gave them money for the jukebox.

As the corny guitarmonies of “More Than a Feeling” sailed out of the PA, I looked around and through the shadows spied several tables clustered around a dormant DJ booth. The walls were hung with banners supporting the armed forces; I wondered if they’d been up forever or just for a decade or two, and when I turned toward the TV, President Obama announced he was pulling 10,000 troops from Afghanistan. Odds were good that a couple of those returning soldiers would find their way into this particular bar. At least that’s what I hoped.

Since I’d had a couple more drafts by then, I started slipping into that sentimental buzz in which coincidences become easier to notice. For me, that’s one beer away from ridiculous, so I signed out. Boston gave way to Lenny Kravitz, and the bartender loudly decreed that politics and religion have no place in a bar. “It Ain’t Over ’til It’s Over” was nearing its outro. I hit the road before the song ended and thought about joining a church. For the conversation, of course. –– Steve Steward