The latest in Hollywood’s slovenly 21st-century penchant for remakes, Fright Night updates the blood-spattered 1985 vampire classic with ample humor and pitch-perfect performances, seasoned with some charmingly low-budget digital gore. What could be a tired retread ends up being a breezily paced romp that manages to build actual suspense, making for a totally enjoyable and even rewatchable summer distraction. 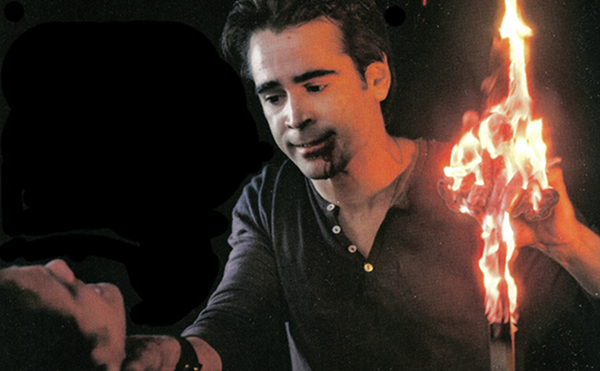 Anton Yelchin stars as Charley, a dork who’s faked his way into the cool clique in his suburban Las Vegas high school, replete with a hot girlfriend named Amy (Imogen Poots) and sidekick Evil (Christopher Mintz-Plasse), the jilted childhood friend who didn’t get to follow his buddy into the winner’s circle. Things are going great for Charley, though he’s a little amused at his mom’s interest in Jerry (Colin Farrell), the hunky new neighbor who disappears each night, allegedly working on the Vegas Strip. Evil, however, has been taking note of the regular disappearances of townsfolk and has determined that Jerry is a vampire. The gag of “Really? A vampire named Jerry?!” makes an appearance repeatedly, but it never seems overused, and indeed, when Farrell isn’t biting people and locking them in a secret, Sheetrock-and-spare-door lair behind his closet, he’s your stereotypical, moderately sleazy, skirt-chasing dick. However, the longstanding vampire conceit of having to invite a bloodsucker in brings out Farrell’s menace.

Director Craig Gillespie (Lars and the Real Girl) lets Farrell terrorize his prey without hamming it up, and Yelchin’s impeccable timing with one-liners makes you forget that it doesn’t make sense when he refuses to tell his mom (Toni Collette) and girlfriend the truth about the shady dude next door. When Evil disappears, Charley is forced to face facts, eventually going to Vegas to ask the advice of baloney vampire expert Peter Vincent (David Tennant), an arrogant Midori-swilling fop who’s parlayed the vampire-hunter shtick into a Criss Angel-esque magic act. As Vincent peels off the accoutrements of his stage show (including his sideburns), it becomes clear that all of the allegedly sacred artifacts in his opulent penthouse are just artifacts. Disappointed, Charley leaves to do his best, though he, his mom, and Amy are no match for a vampire who’s been on the job for hundreds of years. As the action (including a funny yet harrowing escape along a two-lane desert highway) ramps up, you really don’t know how it’s all going to end.

The script by Marti Noxon (a writer on TV’s Buffy the Vampire Slayer) plays a little loose with vampire rules, making room for logically plotted fight sequences. As in most 3-D movies, the visual effect is unnecessary, but at least the movie looks good, and it’s never distracting. By the time the final confrontation rolled around, I was locked in, despite what looked like cherry Slurpee flying at my eyeballs.

For the most part, Fright Night knows it’s essentially a pretty good drive-in horror movie, which means it lets the good times roll without trying to redefine the genre. While it doesn’t have the chill factor of Let the Right One In, Fright Night never bogs down with world-building, mopey gothic romance, or the high-tech weaponry that usually crowds a Hollywood fang feature. Moreover, subtle nods to this decade’s teenage trends (sexting, for example) root the film in the present without turning it into a teen-baiting crapfest. I don’t think anyone in the history of drinking has ever drunk Midori right out of the bottle (the product placement throughout, courtesy of Midori, Budweiser, and Century 21, is kind of comical), but I chalk it up to whatever happening in Vegas staying in Vegas. If vampires are real, Fright Night convinces me that mantra probably applies to them, too.