The term “sophomore jinx” doesn’t apply to One Day, because this isn’t the second film for director Lone Scherfig. This isn’t even her second film in English, in fact. Still, it feels like the sophomore jinx has bitten, probably because her previous film, An Education, was such a glorious breakout hit two years ago. The Danish director has now parlayed that success and her prodigious reserves of talent into adapting David Nicholls’ bestselling novel to the big screen, and the result is the cinematic equivalent of A.R. Gurney’s Love Letters, a hopelessly rose-tinted account of a long-term relationship that reduces all its subject’s complexities to mush. That’s disappointing. 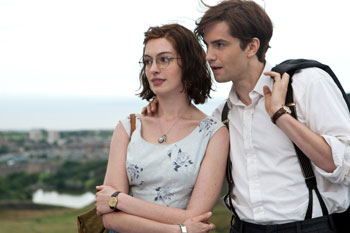 The story begins with Dexter (Jim Sturgess) and Emma (Anne Hathaway), who, having never gotten to know each other as classmates at the University of Edinburgh, are properly introduced on July 15, 1988, in the wake of their graduation. After initially deciding to have sex that evening, they reverse course, sleep together platonically, and agree to stay in touch as friends. The story then follows their respective fortunes on successive July 15ths over the next 20 years, as they both move to London and build their lives separately before finally ending up together.

The novel is full of keen observations about both the evolution of British society from the Thatcher years to the present day and the evolution of these two people, as Emma goes from angry left-wing feminist writer with dreams of shaking the world to a more settled and tolerant person who fulfills her literary ambitions in an unexpected way. Meanwhile, Dexter lives out all his shallow dreams of becoming a rich and famous TV personality, only to have the death of his beloved mum (Patricia Clarkson) send him spiraling into alcoholism. No wonder these people can’t get together in the early going; the privileged Dex puts on a Cockney accent to come across like a man of the people on television, while Emma flees her working-class Yorkshire background in favor of highbrow culture and social causes. Yet as unsuited as the two are, Nicholls’ beautifully written book gives an uncannily convincing sense of their lives winding a circuitous path toward each other and onward.

So what the hell happened with the movie? Sadly, the mistake was letting Nicholls adapt his own book to the screen. The writer is not new to films, having penned the big-screen versions of both his own previous novel Starter for Ten and Blake Morrison’s memoir And When Did You Last See Your Father? Here, Nicholls tenaciously replicates his book’s structure of taking place only on July 15, allowing us to infer the momentous events that happen on the other 364 and a quarter days.

The effect should be rigorous, but instead it’s impoverishing — one entire year is addressed solely by a 30-second clip of Dexter drunk-dialing Emma after a show. Granted, a movie doesn’t necessarily need three hours to capture the texture and fullness of an entire human life. (The Pixar film Up managed to do it in three minutes.) Here, though, the book’s layers of detail are lost, and Dexter’s and Emma’s hopes and dreams are often reduced to fodder for sitcom patter, and not even funny patter at that. Graceful prose stylist though Nicholls is, he’s no good at writing snappy dialogue. Joke after joke lands weakly, and there’s scarcely any difference between the main characters’ punchlines and those tossed off by Emma’s early-1990s boyfriend (Rafe Spall), a bad stand-up comic who can’t switch himself off.

This isn’t all the writer’s fault, though. Nobody else brings their best to this project either, not the director (who foreshadows the ultimate twist in Dex and Emma’s romance way too heavily), not the principal cast members, not cinematographer Benoît Delhomme, not composer Rachel Portman. A few actors on the margins give us some tasty performances: Ken Stott as Dex’s flinty dad and Jodie Whittaker as Emma’s college friend who stands up at her own wedding reception and sings a fearsomely intense karaoke rendition of Robbie Williams’ “Angels.” These, however, aren’t nearly enough to salvage this affair.

If you want a better recent film that follows school chums through the joys and disappointments of early adulthood, you should try out Joachim Trier’s zippy 2008 Norwegian film Reprise. That movie is full of self-conscious narrative devices that work in tandem with its insights into its characters and milieu, much like Nicholls’ novel One Day. The film of One Day is missing the insights, which is why it feels so gimmicky and banal.

Starring Anne Hathaway and Jim Sturgess. Directed by Lone Scherfig. Written by David Nicholls, based on his own novel. Rated PG-13.