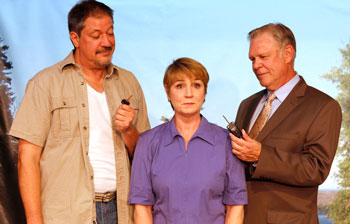 The show’s playwright, Steven Dietz, is of course a man, and I’m curious if he invented this bit of philosophy or if it’s some kind of distaff conventional wisdom. In any case, it nicely summarizes the way restlessness and yearning disguise themselves in the minds of middle-aged people who think they have no right to expect anything genuinely new or exciting to happen. Becky’s New Car has a central character who is smart, funny, and apparently emotionally balanced, yet she dares to make very unsympathetic decisions for reasons no more compelling than her longing for new experiences. As directed with typical confidence and generous humanity by Robin Armstrong, Circle’s comic exploration of family disruptions and disappointments feels brave and crisp during the first two-thirds of the show, thanks largely to Fairchild’s casually masterful performance as an unapologetic risk-taker, a perversely reasonable betrayer of home and hearth. Ultimately, though, the disappointing and slightly ludicrous second act reveals that Becky will be allowed to stray only so far.

Set in “an American city very much like Seattle,” the show follows its protagonist as she edges ever closer to an affair with a fabulously wealthy billboard entrepreneur named Walter (John S. Davies), whom she meets at the car dealership. He’s still reeling from the death of a wife he idolized, so much so that he can’t bring himself to throw away the frozen popsicle she’d eaten part of just days before her death. Becky’s life, by her own admission, is “content and complete.” She has a sweetly smartass “big lug” of a roofer husband named Joe (Mark Fickert, wielding expert timing) who’s a candidate for most laid-back guy on the planet. Their grown son Chris (a scruffy and delightfully un-self-aware Curtis Raymond Shideler) lives in the basement, where he leisurely studies for a psychology degree and constantly diagnoses his parents’ behavior. Becky has secondhand knowledge of what it’s like to lose a spouse thanks to her still-in-mourning coworker Steve (Stan Graner), who obsessively recounts the falling death of his beloved during a camping trip. But Becky is desperate to take her own leap out of a comfortable and predictable home life, so she dresses to the nines and attends a ritzy dinner party thrown by Walter, who makes it clear he is romantically interested. The question of whether Becky will begin a passionate and reckless new chapter in her life is unfortunately resolved with a finale that is chaotic, far-fetched, and just as conventional as the life that has grown so stale for her.

Playwright Dietz was commissioned to write Becky’s New Car by a Seattle man as an anniversary gift for the man’s wife. According to the show’s program, Dietz was instructed to pen a play that wasn’t “dark.” Certainly angst and eccentricity for their own sake are a drag, but the playwright flirts with themes of hopelessness and misspent lives strongly enough to make us feel he’s rebelling a little against his patron. Then he seems to take it all back by cluttering the last part of the second act with some messy bits of business about mistaken identities and sudden, unearned resolutions.

You’re not likely to see a better match of actors and roles than in Becky’s New Car. Davies makes his wealthy widower’s grief lavishly hilarious. In a similar vein, Graner can’t keep quiet about the loss of his own wife, even sharing it in an uproarious and unfortunately public way with a little boy and his dog. Fritz Ketchum is a glamorous knockout in a small but flashy role as a predatory timber heiress invited to Walter’s dinner party who must find a husband fast or fend for herself. I couldn’t complain about any of the performances, and apparently neither could the audience — the house was filled with laughter for much of the evening. But Becky’s New Car set me up to drive to some adventurous, even dangerous places and then settled for silly farcical detours before finally idling to a stop. While the script probably made for a very sweet anniversary gift, it was a bit of a letdown as an evening of theater.