Opening a large live-music venue is a natural career transition for Bill Smith, the developer behind the forthcoming Live Oak Music Hall & Lounge on the Near South Side in the Fairmount District. He’s done construction since 1974, and, “There was never a time I didn’t have musicians working around me,” he said. Smith learned a thing or two about the music business from the starving artists who populated his crews, and from all that time “dining out, drinking, and catching live shows” with musicians, he picked apart the qualities of successful –– and unsuccessful –– venues. Live Oak will be the result of almost four decades of those observations.

With that background, you can believe Smith when he says his venue will be artist-friendly. Moreover, he’s handed booking duties to Clint Simpson, a Fort Worth native and music promoter who gained much of his experience in Nashville booking gigs for the nationally recognized but now-defunct bluegrass outfit Cadillac Sky. (His brother, Bryan, fronted the band.) As the group was dissolving earlier this year, Simpson had to plot his next move and didn’t know whether he wanted to stay in Nashville. The call came from Smith about Live Oak, and Simpson knew he had to get involved. “This is what Fort Worth needs,” he said. “The last place that did it right was Caravan of Dreams.” 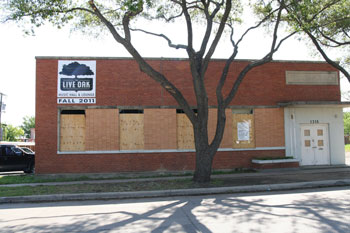 Announced in April to much buzz, Live Oak has taken residence in the former Southside Lions Club Community Center at 1311 Lipscomb St. Smith said that the building, empty for the last five years or so, had most recently hosted wedding receptions. Now it’s been cleared out and will be fully transformed into a casual, semi-upscale concert hall with three performance spaces: a main stage, which will assume half of the building’s 5,000 square feet; a lounge up front with seating and a full bar; and another stage on one of the venue’s ground-level patios. Smith has signed a long lease on the building, and should this venture do well, you can expect to see an even more ambitious project from him in the future.

With the final touches put on Live Oak’s building permit last week, construction is now under way. The hall was originally slated to open this October; now Smith vows that the doors will open before the end of the year.

The veteran builder, whose last job was on The Usual on nearby West Magnolia Avenue, is pleased with all the new blood entering the area and rattled off the names of several new developments. News about Live Oak broke around the same time word began spreading about the openings of two other nearby entertainment spots: The Wine Bar and the Boiled Owl Tavern.

Smith and Simpson are likewise supportive of other players in Fort Worth’s music scene. “We’ll certainly work with local promoters to bring in big-name, higher-ticket acts,” said Simpson. “It’ll be competitive and cooperative.”

But Live Oak will not cater disproportionately to local musicians. “It won’t be another bar for us to play,” said Quaker City Night Hawks bassist Pat Adams in a July interview. Adams helped Smith conceive the venue in the early stages, just as he did with The Where House, run by Smith’s son, Casey. However, Adams said, “Local acts could get opening slots or be able to throw CD release parties” at Live Oak. Some local musicians might even find day-jobs there, giving music lessons to neighborhood kids.

Ideally, Smith would like to see Live Oak become a stable force in the neighborhood and, by keeping hours on weeknights and even during the day, multi-purpose. That also means it will be genre-friendly. “We want college kids, and we want folks with dreadlocks,” Simpson said.

Also expect some chamber music and piano recitals. To be sure, the venue will be a little classier and less rowdy than most similarly sized performance spaces. From the beginning, Smith told Live Oak’s residential and business neighbors that he won’t let his shows get out of control, something he hopes to ensure by hosting few if any 21-and-up only performances.

So what kinds of sounds to expect? Mainly mid-level touring indie acts, the kind that usually hit only Dallas if they touch North Texas at all. “That’s our competition,” Simpson said. “We’ll be drawing upon the same crowds in Dallas, bringing them here,” not just vying to keep Fort Worth music fans from leaving.

Indeed, the name you’ll hear most often as a comparison to Live Oak is the Kessler Theater, an ultra-hip venue housed in a historic building in the thick of Dallas’ blooming Oak Cliff neighborhood. In Fort Worth, the closest analogs to Live Oak might be Bass Performance Hall’s McDavid Studio, which has a rather sporadic schedule, and the still-under-renovation Ridglea Theater, now set to reopen next spring.

Live Oak has the opportunity to fill a void in the Near South Side created by The Fairmount’s closing in 2009 and also a larger void, citywide. The local music scene here might have a lot of fire right now, but fans still have to trek all the way to Dallas for shows by marquee touring acts. If Smith can put his money where his mouth is, Live Oak will go a long way toward remedying that situation. 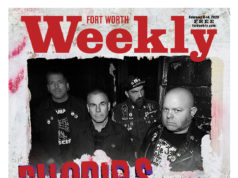