This cheapskate waiter-hating person I know gave me crap for using this space as a soapbox for the service industry, a crime to which I proudly plead guilty. But I also use it to stump for the rights of professional drunks, potheads, and bands I really like (which would make for a pretty uninteresting Venn diagram), not to mention promoting local businesses trying to get people in the door. 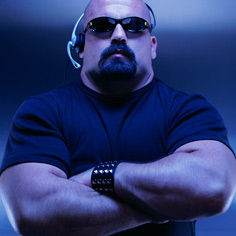 “I’m a customer,” he recently sniffed. “You should just write recommendations.” I told him he should go read Yelp. Sure, I’ll review a place if it provides narrative thrust, but I’m way more interested in the culture of Clubland. To me, every element of a bar, from the vibe and the energy produced by light and sound to the various psychic frequencies emanating from cross-counter relations, is salient to the universal drinking experience. If I remember it the next morning, each night out is an episode in a show about drinking, one that’s been airing in my brain since that long-past first pull off a Goldschläger bottle, which also means that every person in a bar is a character.

Of course, I’m really an advocate for the characters who pour your drinks, make your food, and clean up your messes, but for all my ranting about shitty tippers and birthday princesses, I don’t think I’ve ever written about door guys in any depth. It’s not like they’re unsung heroes or anything, but they are often integral to a smooth operation and usually make a bar a better place. Provided a door guy (or chick, if you’re at Lola’s or The Basement Bar) is diligent, he is the first line of defense against minors. Door people are also given the unenviable task of being the presence that calms belligerence, the usher at the end of the night, and the person stuck with unplugging the toilet. While bartenders whisk around making money hand over fist (in theory, anyway) and having a good time, door guys are left with sentry duty, ready to dispense buzz-killing justice when needed. Being a door guy can be a boring, irritating, potentially gorge-raising job, and it usually doesn’t pay very much.

My time in the service industry started with a door-guy job 10 years ago. I met a lot of people, from a certain local rock band riding the high from a dubiously successful reality show victory to the biggest, stupidest louts on TCU’s 2001 offensive line and every coked-up frat brah and pill-droopy sorostitute in between. I wiped barf off the bar counter and tried to exterminate fruit flies, and when I got promoted to bartender, I couldn’t get behind the counter fast enough.

Forgetting door guys in the milieu of Clubland is mea culpa, but I think it happened because I haven’t had to sweat it on the proverbial stool in such a long time — I guess I needed a reminder, which came while filling in a few shifts for one of the Flying Saucer’s regular dudes.

Given that my door security experience is limited to the TCU area, I looked for differences between working the door in Under21-land and in the comparatively older-skewing market downtown. It’s a lot of the same hassles, though most of the age-restriction problems seem to stem from young women who mysteriously left their IDs somewhere. If there’s a downtown stereotype, I’d say it’s bald, muscle-bound whiners who balk at paying a cover. There’s also their older, loose-skinned counterpart. Neither type gives a shit about paying bands. At least at the Saucer, where you have a staggering array of beers, these dudes invariable go for Miller Lite. One curious trait: When the beefy bald baby gets to be a certain age, he seems to think it’s OK to pat the door guy on the shoulder. By the time happy hour finished recently, I’d gotten so many unwanted pats on the back I thought I’d won something in the Special Olympics.

Still, it’s an easy job, and I didn’t really mind — for every beetle-browed complaint about a $3 cover charge, I got 10 more grins, good-natured jokes, and people happy to pay for the privilege of spending money. So thanks to those of you who are nice to the guy checking IDs — but no touching. We really appreciate it. The band’ll probably go on around 10. –– Steve Steward