The three musicians in the post-rock instrumental project Drift Era love writing, performing, and recording original music, but their fantasy is to score films for some of their favorite directors like Wes Anderson and Terry Gilliam. Anyone who’s listened to Drift Era’s tuneage either online or in person won’t be surprised by such cinematic leanings. Tunes like “Smoking Lamp,” “Really Black Magic,” and “Slowly Going the Way of the Trade Winds” are all about evoking mysterious, sometimes sinister, sometimes lighthearted moods that could provide the backdrop to all kinds of filmic shenanigans. With propulsive rhythms by drummer Michael Garcia, improvisatory fretwork by guitarist Michael Tune, and a variety of electronic string and keyboard effects by producer and multi-instrumentalist Jonathon O’Connor, Drift Era strives to write soundtracks for the human imagination. “We watch movies [with the sound turned down] and just play our instruments along with them,” said Garcia, 28, a Fort Worth native. “We pop in a Michel Gondry or a Stanley Kubrick whenever we need something visual to inspire us.” 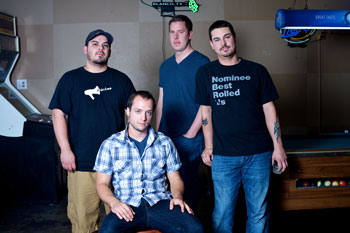 Although the Drift Era guys have been playing together for less than a year, they’ve managed to synthesize their musical influences pretty impressively. These include the famous (Sonic Youth, Radiohead), the slightly obscure or forgotten (Tortoise, Mogwai), and the local (sub oslo). O’Connor started making music about four years ago with a loose outfit he called JoCo, inspired by cheap home-recording technology and his own unusual sonic tastes. “I could sit for 90 minutes and just listen to guitar feedback and drone,” said O’Connor, 31, also a Fort Worth native. “With JoCo, I started making the kind of music I wanted to hear. It was lo-fi and more downtrodden [than Drift Era]. I wanted the recordings to have a deliberately crappy sound.”

O’Connor had trouble finding musicians who’d commit to steady rehearsals and performances with JoCo, and about a year ago he and Garcia — who’d known each other for several years — decided to merge their distinct musical sensibilities. O’Connor uses a handheld synthesizer called a Korg Monotron as well as an e-bow — an electronic bow that he slides across a guitar violin-style to create bizarre and dissonant effects. Garcia started as a bassist and then switched to drums, insisting that a hard funk/hip-hop edge should be brought into the sound. Soon after, Tune came onboard for the new ensemble, and all three of them began to pursue a cleaner, tighter, brighter sound that was still “more about style and enthusiasm than technical skill,” as Garcia put it.

Drift Era has played shows at The Grotto and Froggy’s Beach Club, insisting there is no frontman — each instrument is as important and potentially expressive as the others. The band has recorded about a dozen tracks so far, including several just this summer using technology as disparate as an iPhone (“I was surprised at how good it sounded,” said O’Connor) and a four-track recorder. O’Connor and company consider the music to be still evolving and are proud that it’s hard to classify. Both O’Connor and Garcia toss around labels like “shoegaze,” “ambient,” and “trance rock,” but there’s one broad category that each band member enthusiastically embraces: post-rock.

In O’Connor’s mind, post-rock is “anything that’s instrumental and isn’t fast,” he said. “I love [the openness] of that. There’s no lead singer with an ego to get in the way. It’s like, if the apocalypse happened, and everybody lost their voices, the only thing to do would be pick up the instruments and start playing.”

O’Connor and Garcia refer to Drift Era as a serious hobby that they are committed to for the long haul. Right now, the band has just taken on a bassist, Josh Howell, but is going on a hiatus — O’Connor’s girlfriend just had a baby, and Tune and his girlfriend are expecting. The musicians hope to play a few more local shows in 2011 and then early next year begin laying down tracks for a debut EP. Garcia said he wants to keep it low pressure: “I consider myself blessed just to be doing interviews like this one and playing shows and hanging out with my friends,” he said. “I don’t mean to sound like a hippy, but it’s not all about the money. Music is therapeutic for me.”

O’Connor has very specific markers for what success would mean to him — longevity and unfettered creativity. His favorite band on the planet provides an excellent working model. “Look at Sonic Youth,” he said. “They’re been doing it since 1978. They’re not rich rock stars, but they make a living. And they’re always relevant.”