In a dramatic change of direction, the Fort Worth Symphony Orchestra turned its focus from traditional European fare to American theater and concert music for FWSO’s annual pre-season festival in Bass Performance Hall last week. Works by Aaron Copland, Leonard Bernstein, and George Gershwin were scheduled for three successive evenings, and if the orchestra hoped to lure new or larger audiences with the change, the results were mixed.

At one point on the first night, staff pianist Shields-Collins Bray, who offered commentary between performances, asked if anyone was seeing the orchestra for the first time. From my perch two-thirds of the way back in orchestra seating, I saw four hands go up. When he asked how many people were visiting Bass Hall for the first time, he got the same response. While I couldn’t see into the balconies, I concluded that the faithful were out in force –– attendance each night was good. 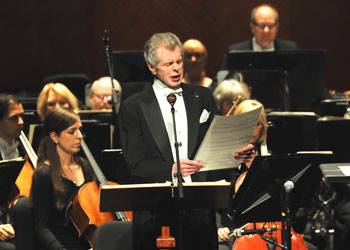 The highlight of the series has to be Copland’s Lincoln Portrait, performed only on the second night and narrated by hometown hero Van Cliburn, who read excerpts of Lincoln’s speeches over arrangements of familiar songs, including “Camptown Races” and “Springfield Mountain,” the music surging to a climax at the final words to “The Gettysburg Address.” After Cliburn’s sonorous voice rose majestically with “this nation, under God, shall have a new birth of freedom — and that government of the people, by the people, for the people, shall not perish from the Earth,” the audience got to its feet and began cheering wildly –– and at least one person was a little choked up. Conductor Miguel Harth-Bedoya gave great support with the orchestra.

Copland’s suite from his ballet Billy the Kid and a portion of the suite from his opera The Tender Land were enhanced with overhead projections of artworks from the Amon Carter Museum of American Art: a great idea on paper but not so much in reality. The screen was small, and a number of the drawings by Frederic Remington and Charles Russell used to illustrate Billy the Kid were pale and hard to see, and some of the Depression-era photos by Walker Evans for The Tender Land were too small to make out.

Baritone Jonathan Beyer, who will be seen in Fort Worth Opera’s Marriage of Figaro next season, gave a sensitive performance of Copland’s Old American Songs, some of which feature the iconic sounds that now define our idea of the Old West and the frontier (an amazing achievement for a man born in 1900 to Lithuanian Jewish immigrants and who grew up over his father’s dry goods store in Brooklyn and never knew the Old West or the frontier).

Bernstein was represented by symphonic versions of his dances from West Side Story and On the Town and by his score for the film On the Waterfront. They were beautifully played, but I still prefer the leaner sound of a pit orchestra for West Side Story. It’s more visceral and in-your-face than the souped-up symphonic score.

His Chichester Psalms, commissioned in the mid-1960s  by Chichester Cathedral in England with text set in Hebrew, was sung by the Fort Worth Choral Society, an amalgamation of smaller area choruses under the direction of Randy Jordan, with boy soprano Zachary Harrison, a tall 13-year-old (he’s taller than Harth-Bedoya). Singing the 23rd Psalm, Harrison offered a pure, sweet sound suggesting a lone shepherd boy in a field. The chorus stood on risers behind the orchestra, and the miked sound created the sonic illusion that the singers were hovering over the orchestra, giving the performance an eerie, otherworldly effect.

The series was rounded out by Gershwin numbers, including the ever- popular tone poem An American in Paris, made famous by the 1952 Hollywood film of the same name, plus Porgy and Bess: A Symphonic Picture (arranged by Gershwin’s friend Robert Russell Bennett) and “Rhapsody in Blue.” Harth-Bedoya seemed right at home here, coaxing some ravishing sounds from the strings, especially in “Summertime” and “Bess, You Is My Woman Now.” Bray was soloist for the rhapsody, heard here in its original (1924) small-jazz orchestra format, with 10 strings and select wind instruments. He gave a solid, energetic performance that earned a sustained ovation and responded with a poignant account of “Someone to Watch Over Me” as an encore.