Everybody knows them: the addresses that seem to carry some curse, where restaurants and bars go to die. There’s one over on Belknap Street in the Riverside area, one on the south side of I-30 East. And the one I remember best, where Mac’s House used to be on Camp Bowie Boulevard. The building housed a carousel of a half-dozen other restaurants before it finally — perhaps mercifully — was bulldozed. Now there’s a bank there, clear proof of bad ju-ju.

The most recent addition to the haunted list seems to be 911 Houston St. in the SoDo (south downtown) area. That location has cycled through a handful of businesses over the last decade. Recently it was Rio’s Downtown Bar & Grill, a low-cost Tex-Mex eatery; before that it was Bent Lounge, a velvet-roped see-and-be-seen nightclub. 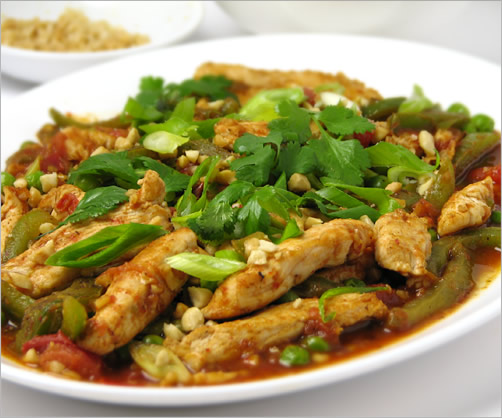 Now another brave entrepreneur has moved in. Tie Restaurant & Bar is an offshoot of Dallas’s Thai Thai Restaurant, and a recent visit seemed to suggest that the curse is still working: When we arrived around 8 p.m. there were no other customers in the restaurant. And this was our second try: The evening before, we’d found the place closed because the air conditioner had gone out. This time, the A.C. was working but limping — the temperature inside was still a little uncomfortable.

If only the TV sets had gone out. That’s my new pet peeve — restaurants where you can’t have a conversation because of the blare of some football game (in this case, the Redskins vs. Ravens). Give me insipid background music any day — at least it stays in the background.

The three TV sets provided almost all the lighting in the place, and by their glow we saw a sleek, modern décor. The walls are covered in bamboo, and the dark wood floors still have that new restaurant shine.

I’ve heard that Tie’s is often packed at lunch, which is good, because there are 79 items on the menu, not counting specials, and I hate to think of all that Thai variety being wasted on crowds of two. My curiosity was piqued by the corn patties ($4.95), deep fried and served with a salty, spicy cucumber sauce that balanced the sweetness of the corn. The steamed dumpling appetizer ($5.95) was even better. The mushroom soy sauce had a molasses-like aftertaste but was still delicate and didn’t overpower the ground pork and shrimp stuffing.

The green pork curry ($9.95) with coconut milk, bamboo shoots, bell peppers, zucchini, and basil was as pretty to look at as it was tasty. The rice was formed into a little mound and the curry dish was served in the kind of angular, artsy bowl that M.C. Escher would have eaten from. The sauce had a spicy-sweet equilibrium, and the veggies weren’t overcooked — an all-too-common problem in stewed dishes. My spice cowardice reared its ugly head once again, and I dulled down the heat of pad kee mao ($8.95), to a level two (on a scale of one to four). It was still delicious. The flat noodles were cooked al dente, and the basil and chili sauce tasted of mint and licorice.

The hovering service was forgivable, since we were the only diners in the place, but it was still annoying. Our server watched us from the bar and ran over every time I put my chopsticks down, to ask if she could clear away my plate. I chalk that up to enthusiasm rather than to a desire to get rid of us so she could go home.

Despite the problems, I have a good feeling about this place. Time can easily iron out the service hiccups, and a flick of the remote would take care of the TV noise. The risk is that, in these kinds of locations, time may be a luxury that Tie won’t have.