When it comes to spy agencies, Americans are typically familiar with four: the CIA, the old KGB, Britain’s Ml6, and Israel’s Mossad. This last is known for general badassery, a reputation built on shrewd intelligence and swift retribution. As Seth Rogen’s Knocked Up character points out about the Mossad, the Jews don’t mess around. In the case of The Debt, the fictional version of the Mossad definitely doesn’t mess around when it screws up, covering up a failed mission with three decades of an iron-bound lie.

Beginning with a 1997 reception for the members of a Mossad unit responsible for assassinating Nazi war criminal Dieter Vogel (Jesper Christensen) 30 years earlier, The Debt introduces us to weary retired agent Rachel Singer (Helen Mirren), famous in the agency for putting the fatal bullet in Vogel’s back. Her journalist daughter is about to publish a book about the affair, and the fete also introduces some latent drama between Rachel and her ex-husband, former unit commander and Israeli politician Stefan Gold (Tom Wilkinson). Conspicuously absent is their other partner, David Peretz (Sam Worthington).

Via flashbacks to 1966, we find the younger Rachel (Jessica Chastain) meeting with her Mossad colleagues in West Berlin, posing as David’s wife. While they stalk their prey, the cabin fever inherent in a stakeout begins to simmer with sexual tension, und 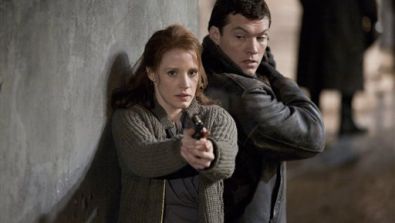 erscored by the fact that Vogel has hidden himself in the guise of a kindly gynecologist, whom Rachel has to visit as part of her cover. Watching Rachel barely maintain her composure during already-unpleasant pregnancy exams is an effectively gut-wrenching experience, and we see it mirrored in the way she tears her hand away from David’s as soon as they are out of the public’s eye. Director John Madden ramps up the tension once the team captures and immobilizes Dr. Vogel in the flat, ostensibly to kill him softly. But he’s no easy mark, subtly pushing their buttons, first by reopening Holocaust wounds and then by declaring that Rachel actually is pregnant but not by David, who has fallen for her. Vogel psychologically prods David into angrily smashing him in the face with a ceramic bowl, the shards of which provide Vogel with an avenue for escape. Rachel, despite being violently slammed into a heater by Vogel, manages to shoot him through a window as he flees into an alley, apparently killing him.

Apparently. Back in 1997, an old man in a Kiev mental institution claims to be Dr. Vogel, alive and well and ready to spill the beans to a reporter. After the older David (Ciarán Hinds) commits suicide by jumping in front of a truck, Stefan tasks Rachel with going to the hospital and finishing the job.

The movie loses a little steam in the mid-1960s, after Vogel’s aforementioned manipulation causes the whole scheme to unravel, but the chemistry among the actors doesn’t feel natural, and as they get increasingly frazzled, you start to wonder if they aren’t just shitty spies, especially because Vogel actually escapes. The three agree to lie that they killed him and disposed of his body, counting on Vogel’s Nazi stigma to keep him in hiding for the rest of his days.

Madden tries to ratchet up the strain that Vogel puts on the team, but the sexual politics in the flat never reach the furor that the director’s obviously looking for. You have to blame Worthington, who can’t seem to do anything but brood and pine for Rachel. And while Mirren is effective as a woman tired of living a lie, the idea of scrupulous intelligence officers is hard to swallow — these people are trained to lie to ensure their survival, and the story suffers for this implausibility until the older Rachel gives in and goes to Kiev.

Luckily, the script is tight enough that it’s seldom hampered by Worthington’s mopery, and when the team members are stuck in the flat, they pass the time by practicing martial arts. When Rachel confronts Dr. Vogel in the middle of her pelvic exam, the audience has something to cheer for (as well as the spies’ escape in a purloined ambulance). Still, compared to the Bourne movies, Munich, or Body of Lies, The Debt doesn’t have enough action to make you enthusiastic about what happens next; the director seems to expect you to be on the edge of your seat based simply on the subject matter and a love-triangle that barely sizzles. While the Mossad might have a reputation for calculated, relentless effectiveness, The Debt will be remembered for botching more than just a fictitious assassination.