Seen any TV commercials lately? Lots of hipsters onscreen. Lots. Which has to make you wonder: Has hipsterism gone mainstream? Well, kinda. Even though the hipster’s hallmark attributes of edgy aesthetics and progressive politics aren’t exactly catching fire in Middle America, the hipster look is everywhere. True to our postmodern historical context, the hipster synthesizes various styles from various eras, essentially insulating himself from obsolescence. The absence of style can always be au courant. The downside –– or upside, depending on where you’re standing –– is that anyone, young or old, rich or poor, can adopt the hipster look (and maybe lifestyle). Unfortunately, though, when “revolution” becomes a commodity (as it always seems to do), the manifestation-du-jour of revolution –– in today’s case, the hipster –– often becomes a self-parody. Most bona fide hipsters, true, could care less. 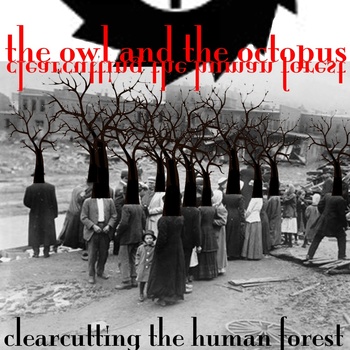 They’re too busy doing Apollo’s work. But some authentic hipsters are rebelling, which brings us to The Owl & The Octopus. The avant-garde vehicle for Fort Worth’s Terry Horn (Hentai Improvising Orchestra, Stone Machine Electric), TO&TO has just released an album, Clearcutting the Human Forest, a statement against potential faux-hipster hegemony. Are we saying that tracks from the album will soon be spun on KXT? No. But I’m willing to bet that faux-hipsters, so sure in their enlightenment, so sure in their anti-nothing/pro-everything new mainstream, will dismiss the album as merely noise. And, yes, it is noise. Buzzes, whirrs, and field recordings (running water, speech, everyday clatter) pop up throughout the tracks. However, as a musician proficient in linear/pop musics, Horn intersperses his abstracted sonicscapes with extended minimalist movements (riffs plus steady beats) in the school of Glass and Reich: The repetition achieves a kind of hypnotic grandeur, often evocative of some sort of narrative. Some stories wind through JigSaw’s house of horrors; some stroll casually down crowded avenues; others course through New York City’s graffiti-laced subways (thanks mainly to contributions from guest Joe & The Sonic Dirt from Madagascar, the nom de musique of Matt Hickey, another HIO conspirator). Uniting all of the tracks is a fresh, fun skillfulness. You get the feeling that Horn couldn’t dwell on pure dissonance if there was a gun to his head, though, yes, he nods to glitchwerks (repetitive noises with an industrial feel) and to collage (random noises –– some musical, some not –– piled on top of one another). The purpose of Clearcutting the Human Forest? Does revolution count? (Yes, it does.)

As first reported on Facebook, The Orbans are working on a follow-up to their marvelous 2010 debut, When We Were Wild. The Fort Worth/Dallas quintet recently spent a week in Wyoming in a small cabin at the base of the Grand Tetons writing new material. The band intends to lay down tracks in the winter at a studio to be determined and hopes to reunite with the guy who produced When We Were Wild, Adam Lasus. The Orbans also have a new drummer, former New Yorker Jordan Elder, and have signed a publishing deal with Songs (Bright Eyes, Old 97’s). The Orbans play on Saturday at Lola’s Saloon (2736 W 6th St, 817-877-0666) with Austin’s Quiet Company and fellow Fort Worth alt-country purveyors Kevin Aldridge & The Appraisers.