The OK Corral is a big club — it draws more than 3,000 patrons on most weekend nights. Located in the La Gran Plaza shopping center on Fort Worth’s South Side, it caters to local Hispanics with Mexican-style country bands, a big dance floor, and several bar stations. In Tarrant County, the Corral is second only to Billy Bob’s Texas in alcohol sales. State records show that the club brought in more than $3.2 million last year. 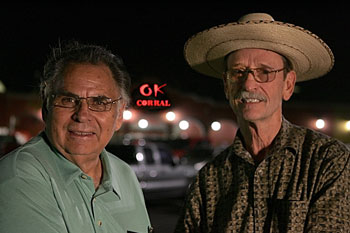 But as with any big club near an established neighborhood, balancing the noise, traffic, and safety issues can be difficult, especially around closing time when bar patrons leave en masse. In this case, residents of the Rosemont neighborhood, just west of the club, have complained to police and to mall and club management that nothing is being done to curtail the violence and traffic congestion that gets spilled into their neighborhood on weekend nights .

But a representative of the OK Corral said she doesn’t see the problems being described. And, she said, it’s not the responsibility of the club to control what happens off their property.

“We make sure that our property is safe, and we videotape what happens in the parking lot on weekends,” said Gabriela Rosales, a spokeswoman for Dallas-based Arcabada, Inc., which owns the Corral and four other similar clubs in Texas.

“What is happening is that a few people, particularly one man, are making an issue out of this, and there is no evidence what they are claiming is happening,” she said.

The “one man” Rosales is referring to is Robert Snoke, president of the Rosemont Neighborhood Association, and he has his own videotapes of the parking lot, including one that offers graphic evidence of violence. But he’s far from alone in describing the problems spreading from the club into the neighborhood.

A retired military officer, Snoke, 65, has been a burr under the saddle of mall and club managers for several years.  He has demanded meetings, made many phone calls (mostly unreturned), and organized others in his neighborhood to try to get the club shut down.

One of his parking lot videos, filmed on the night of July 31, is particularly jarring. It shows a man being pulled from his pickup truck and then being repeatedly kicked in the head by four others as he lies on the pavement. In the same video, another man is seen dragging a young woman by the hair and kneeing her in the face. Beer bottles are being thrown, and there is a lot of yelling and screaming going on.

The video also shows Fort Worth police officers trying to break up the disturbance but is doesn’t appear any arrests are being made. One officer puts his hand in front of Snoke’s video camera and orders him to stop filming.

“What [the police] are doing is just trying to shoo these young drunks out of the parking lot, and they end up in our neighborhood,” Snoke said. “I’ve tried to get the police to look at this video, and a few have, but they ignore it and do nothing.”

On a recent Saturday, a half-dozen Rosemont residents met at Snoke’s house and backed up his claim about violence from club patrons.

The Rev. Philip Benavides, 43, pastor of the New Life Church on the Near North Side, has lived his whole life in Rosemont, about two blocks from the club. He  recalled a drunken man trying to break into his house in June.

“He came into my backyard at about 3 a.m. and was trying to break in through a window,” Benavides said. “I grabbed my gun and was actually going to shoot him, but he was falling down and passing out, and I felt sorry for him. So I called the police, grabbed a baseball bat, and stood over him until they arrived.

“There are problems pretty much every weekend,” Benavides said. “One night I saw a young couple get naked and start having sex in their pickup truck. Whenever I’ve called the police, they get here pretty quickly. But for the club to say it has nothing to do with [these criminal activities] is just not true.”

Jesse Herrara operates two barbershops in the area and said he has lost count of the times they have been vandalized late at night on weekends.

Evidence from Fort Worth police and the Texas Alcoholic Beverage Commission show that the OK Corral is not much different from other local bars — which doesn’t mean it doesn’t create problems.

“We are not seeing any calls out of the norm for a club that size,” said Fort Worth Police spokesman Sgt. Pedro Criado. “The real problem is not in their parking lot, but when the bar patrons cut through the neighborhood close by and cause problems.”

Criado said several actions have been taken to address the issue. Streets going into the neighborhoods are now being blocked off late in the evenings. Three patrol cars will be assigned to the area around the club on weekend nights, and vans will be set up in the parking lot. “We will be testing for public drunkenness and watching for fights and hauling those people off if they violate the law,” he said.

Criado said he had not seen Snoke’s video of the scary fight in July, but confirmed that one man was arrested for public drunkenness there on that evening.

The TABC has cited the club for violations nine times since it opened in 2003. Most of those were for administrative issues, like bouncing checks to distributors. In January of this year, the agency cited the club for selling alcohol to a minor. But the citation was dismissed after the club worked with the TABC to show proper steps had been taken to ensure that the problem would not happen again, according to TABC spokeswoman Carolyn Beck.

“Some [bars] have no violations, some have many more, so I would say this club is middle of the road,” Beck said.

Rosales painted the disagreements as just part of a larger problem Snoke has with the mall.

But Snoke said, “The mall does have responsibility for the safety of the parking area, and it is our experience that their security guards don’t respond when things get out of hand.”

Last month, tensions between the Rosemont group and La Gran Plaza reached a boiling point. Mall operators wanted to set up a carnival in the parking lot for two weeks in September, offering rides and gaming booths until midnight. They needed a waiver from the Fort Worth Commercial Board of Adjustment.

At the adjustment board hearing, Snoke and his neighbors objected that having the carnival and the club operating simultaneously would create a far bigger traffic mess than already exists on weekend nights. Further, they suggested, it would be a bad idea to mix younger kids at the carnival with bar patrons leaving the club. The board voted 8-2 to deny the variance.

“They really don’t like us now, because we cost them a lot of money by blocking the carnival,” Snoke said.

When he met a Weekly reporter and photographer outside the club on Saturday night, the dislike was evident. As the little group waited for Snoke’s neighbor Lee Frampton on the outer edge of the parking lot, two mall security cars pulled up with their lights flashing. Three guards got out.

The security guards informed us that we were on private property and told us to leave. Snoke informed them that we were on public property — the city easement that extends 12 feet in from the street. Two more security cars pulled up, and four more guards got out. When we wouldn’t leave, the police were called, and three squad cars pulled up. The mall guards and three police officers discussed the situation for more than half an hour. Eventually, the police officers decided that we could stay and shoot photos from the easement but not come any closer.

“When kids are beating each other up at closing time, it is hard to find any of them [guards],” Snoke said. “Does anyone see a problem here?”