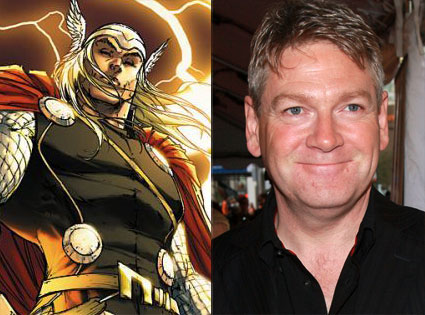 Thor comes out on DVD today, and even though I liked the film when I reviewed it last May, I found it to be more interesting as the next step in the career of director Kenneth Branagh than it was on its own merits.

Branagh’s unusual show business path has taken three distinct phases. In his initial success, he burst onto the scene as a Shakespearean theatrical actor and director who balanced intelligence with showmanship. His flair for the cinematic medium was evident in his 1989 debut, Henry V, which played in theaters before he had turned 30. However, two years later he showed he went Hollywood in a big way, directing and starring in the gleefully trashy supernatural thriller Dead Again. Keeping busy, he came out the following year with Peter’s Friends, a cozy holiday comedy whose small ensemble cast featured a number of Branagh’s Cambridge buddies (including Hugh Laurie and Stephen Fry). Then in 1993 came Much Ado About Nothing, a Shakespeare adaptation with a number of high-powered Hollywood stars. Those stars were the reason why the film was an unexpected financial hit, while receiving generally respectful notices from critics, even if they were less effusive than the ones that greeted Henry V. With all these projects of his own, Branagh took few roles as an actor in other people’s productions, though he did deliver a sizzlingly vituperative performance in a 1989 TV production of Look Back in Anger (directed by Judi Dench!). During this phase, Branagh was the boy wonder of British cinema, and half of a show-business golden couple with his wife and frequent co-star Emma Thompson. His every move was greeted with anticipation.

A decadent phase set in with the expensive, high-profile flop of his 1994 film Mary Shelley’s Frankenstein and the subsequent breakup of Branagh’s marriage to Thompson. Branagh came back in 1996 with two projects, one a low-budget black-and-white comedy called In the Bleak Midwinter (released in America under the title A Midwinter’s Tale) about a plucky group of actors trying to stage a production of Hamlet. The second was Branagh’s own version of Hamlet, a huge David Lean-esque film treatment filled out with British and international stars, plus a few of the actors from Midwinter. In the latter half of the 1990s, he devoted more attention to acting in others’ films, his worthy Iago being easily the best part of Oliver Parker’s 1995 Othello. He turned in a great unacknowledged performance as a boozy hound dog of a Georgia white-shoe lawyer in Robert Altman’s The Gingerbread Man. Still, when he got back into the director’s chair for a film version of Shakespeare’s Love’s Labour’s Lost in the style of 1950s MGM musicals, the result was poorly received by both critics and public. (Unfairly, in my opinion, but that’s neither here nor there.) The failure marks the end of this second phase.

The entire ‘00s were a fallow period for Branagh. He aced out Hugh Grant for the role of Gilderoy Lockhart in 2002’s Harry Potter and the Chamber of Secrets, but his acting performances included forgettable turns in Valkyrie and Pirate Radio, though he earned back some plaudits in 2008 portraying a jaded, grizzled Swedish homicide cop in the British TV adaptation of Wallander. As a director, he was even less busy. He returned to Shakespeare with an ambitious TV version of As You Like It in 2006, but whether it was the small-screen format or a more intrinsic problem, the fizz seemed to be gone. His 2007 big-screen remake of Sleuth teamed him with Nobel-winning writer Harold Pinter, yet the result was curiously dry and academic.

Thor has gotten him back in the win column, drumming up good business and winning positive reviews, though not unanimously so. It’s clearly the start of a new phase for Branagh’s career, but what that phase will look like we have yet to see.

Before Thor came out, Joe Queenan penned this piece in The Guardian critiquing the shape of Branagh’s career. I have issues with the piece; for one thing, I don’t regard the making of a decent blockbuster superhero movie as an unworthy goal, as Mr. Queenan seems to. His notion that Eddie Izzard made it big in America while Branagh didn’t is bizarre, too. Still, Queenan makes a decent point when he notes that Branagh never had a movie star’s traditionally handsome physiognomy, so despite the actor’s considerable thespian skills, we shouldn’t be surprised that movie stardom slipped away from Branagh.

(Side note: Queenan notes that Branagh is miscast in the role of Laurence Olivier in the upcoming film My Week With Marilyn. The actor does seem an ill fit, but then Michelle Williams isn’t the first actress you or I would think of to portray Marilyn Monroe, so perhaps there’s a strategy behind the movie’s counterintuitive casting. Side note to the side note: The first actress I’d think of to play Marilyn would be Scarlett Johansson.)

Queenan largely ignores Branagh’s directing career, so he misses this point: The director was uniquely suited to the 1990s, being slightly ahead of his time. When culture was still somewhat rigidly divided between high and low, Branagh made a big deal about knocking down the barriers, casting actors like Keanu Reeves, Michael Keaton, and Robin Williams in Shakespeare. Back in the early 1990s, movies with gay characters were still occasions for pointing and saying, “Oh, look at that!” Branagh incorporated them freely into his contemporary films, and the character of the drag queen actor in A Midwinter’s Tale (played by John Sessions) starts out as a campy caricature but then pops movingly into three dimensions. Branagh also cast actors of color in his Shakespeare productions, notably Denzel Washington in Much Ado About Nothing, without reference to their race. Again, this was not something one saw much of in the 1990s. (More recently, Branagh’s willingness to cast color-blind led some highly literal-minded fanboys, not to mention some more malignant types, to raise a stink about Thor, with its black and Asian actors portraying Norse gods. Stuff like that makes you want to tell those fanboys to get a life.) Branagh treated these things as if they were no big deal, and by doing so he helped actually make them no big deal. In that way, he really did help shape the course of British culture.

It’s a new world now, and Branagh has managed to find relevance again with Thor. Much of the critical discussion around the film centered on the strangeness of a Shakespeare man taking on a superhero flick, but Branagh’s never been afraid to get his hands dirty with pop culture. Good thing, too, because that attitude would have spelled death for the movie. Certain artists get embarrassed when it comes to comic-book superheroes. Those artists should, and mostly do, steer clear of such material. (Ang Lee’s Hulk is an example of one such artist who didn’t.) British cinema has evolved without him, but now perhaps this wide-ranging filmmaker can still make his way back to that place he used to occupy, where movie fans buzzed about what he might do next.

Of Branagh’s Shakespeare films, Henry V and Hamlet are the keys to understanding what the filmmaker is all about. Elsewhere, I’d recommend any of the films from his first phase. Peter’s Friends has a great performance by Hugh Laurie in a role that’s neither like Dr. House nor like the upper-class twits that Laurie was specializing in at the time. Also in that movie, Branagh casts himself as the least appealing of the main characters, a successful Hollywood TV writer who hates his job. Dead Again is a mishmash of warmed-over Hitchcockian themes that makes very little sense, but it’s a ton of fun, a good-looking piece directed with zest and hammed up enjoyably by a bunch of actors, including one from a pre-Seinfeld Wayne Knight as the hero’s best friend. If you can find The Gingerbread Man, it’s well worth the trouble. Altman’s legal thriller (based on a John Grisham short story) was released in all of two theaters in the entire United States in January 1998, but it’s a smart piece of genre entertainment.