In a few short years, Fungi Girls have released two 7-inch singles, a demo EP (Psilo), and a 12-inch LP (2009’s Seafaring Pyramids), and they’ve toured the country. Much has been made of the fact that the band is composed of three really young dudes and that they hail from Cleburne, of all places. However, the trio’s steady output is worth taking seriously. Music blogs, so crucial to indie acts’ success these days, have noticed, and for good reason — these guys know their shit (“Fungi Girls: All Hyped Up,” June 2, 2011). 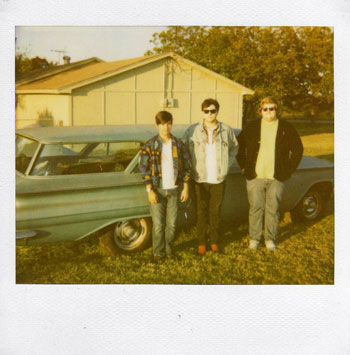 Released this summer by Chicago’s Hozac Records, one of the best-respected indie labels around, Fungi Girls’ new full-length, Some Easy Magic, mixes throwback-pop with a medley of complementary styles. Surf is the most readily recognizable, unifying the group’s pop sensibilities and punk aesthetic. The production, while decidedly unpretentious, is solid and even a little restrained — which is for the better. Some of the material lends itself to psych freak-outs that typically work better live. On record, the group is tight, and no track runs much longer than three minutes.

“Doldrums,” one of the songs released as a  7-incher, has a hook that runs counter to the rather self-explanatory lyrics, almost cheerfully defying attempts to describe it. On the title track, lead singer Jacob Bruce recalls the smooth but melancholic crooning of Ramesh Srivastava from the defunct Texas outfit Voxtrot. With a lo-fi approach to pop, Fungi Girls purvey a sound less showy overall than Voxtrot’s, and it works just fine. But it also conceals the relatively simple songwriting and understated vocals, which Fungi Girls would do well to focus on as they continue developing. In the meantime, Some Easy Magic provides a fun close to the summer and adds to the promise the band holds.

While excitement on the internet has been off the charts in anticipation of St. Vincent’s forthcoming studio album, we’d be remiss not to mention Strange Mercy, the third work from Annie Clark, the singer, songwriter, and guitarist behind the moniker. Released Tuesday, the record may further solidify her status as one of the best indie acts to emerge from North Texas in recent years. Perhaps because so few other artists gain such prominence on the national stage, it’s not surprising that local fans are quick to mention (and credit) her Dallas roots — and she definitely gives the area bragging rights. Throwing her hometown a little love, St. Vincent has booked two sure-to-sell-out performances at Oak Cliff’s intimate Kessler Theater for late October.

Coverage of St. Vincent typically outlines her pedigree — indeed, looking at the list of acts with which Clark has played and toured is analogous to an indie-rock version of Six Degrees of Kevin Bacon. She was once a member of the sprawling Polyphonic Spree and played in Sufjan Stevens’ backing band; solo, she’s shared bills with fellow indie darlings Andrew Bird and Grizzly Bear, among many others. But the music of St. Vincent ably stands on its own, and her rise would be well-earned even without all of those connections.

Her third album continues the ominous tone of its predecessor, but where Actor, her previous album, was tense and frenetic throughout, Strange Mercy generally maintains a slower pace and washes over the listener in waves. The more ornate, twee elements of Marry Me, her debut, are gone, but most of the 11 tracks here still have sturdy melodic passages and hooks. With Clark’s minimalist-but-evocative lyrics, deft guitarwork, and haunting, hypnotic voice (displayed most elegantly on tracks such as “Cruel” and “Neutered Fruit”), the result is something of a pop danse macabre. Over the simple, warm retro vibe on “Surgeon,” she sings the darkly seductive refrain, “Come cut me open.” There are many sounds of the ’70s, from the occasional talk-box effects to the pounding guitar riff and strings on “Dilettante,” a likely nod to Zeppelin. A track such as “Northern Lights” stretches back a little further and even bears something of a latter-day Fab Four influence.

Strange Mercy will strike fans as another sure-footed effort from St. Vincent but might require a few spins and more attention than usual for the nuances to reveal themselves.