Terri Hall, whose Texans United for Reform and Freedom helped lead the fight against the Trans-Texas Corridor a few years back, has never been a fan of Gov. Rick Perry, godfather to Texas toll roads. Not surprisingly, she’s just as un-enamored these days of the Texas Legislature. TURF issued a release this week calling the recent disaster in Austin “the worst legislative session since the dawn of the Trans-Texas Corridor.” Static could not agree more except perhaps to amend it to “since the dawn of time.” 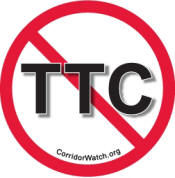 Hall’s group presented their list of the worst of the worst — the baddest ol’ bills that the Legislature passed this summer — topped, not surprisingly, by a bill that opens the door to selling off everything the state owns, down to hospitals and schools, to private for-profit corporations, in the name of “public-private partnerships.” Then there were the bills that will allow private companies, including foreign corporations, to keep ownership of Texas toll roads in perpetuity and perhaps move all “free” traffic off some highways — so that even if your big wide Texas freeway has already been paid for with your tax dollars, you won’t be allowed to drive on any of its main lanes without paying hefty tolls. No sir, frontage roads will be good enough for the likes of most of us. If only Perry’s presidential campaign could be moved to the frontage road, perhaps re-routed to some bumpy dead-end. Next to some farm whose owner has lost half her land to a toll road …

There are the Oscars and the Emmys and the Grammys and now, down in Glen Rose, the Rellies. That’s what Layla Caraway and Bob Lukemon brought home over Labor Day weekend, from Glen Rose’s Neo-Relix Film Festival. Their documentary, Up a Creek, about the curious uses of flood control money in Tarrant County, won a “Rellie” in the conservation category. The film’s production was sponsored by the Trinity River Improvement Partnership or TRIP, a group with major objections to the Trinity River Vision project.

Not to rest on its laurels, TRIP is holding a session on Wednesday (Sept. 14), at 6:30 p.m. at 2501 Ludelle, just off Beach Street and Lancaster Avenue to talk about Tarrant County water supplies (as we watch area lakes continue to shrink) and about the levels of PCBs in the Trinity, and other topics guaranteed to make you appreciate more than ever the wonders and the work behind a tall glass of cool, clear water.