Seeing the poster for yet another Jason Statham movie, you’re probably thinking that Killer Elite is exactly like all the others. You’re right, too, except that it’s actually quite good. That’s the thing about Jason Statham movies; they all give you pretty much the same thing, but some of them are far better than the others. Some of them, in fact, manage to excel without taking the star too far out of his comfort zone. The Bank Job was one such, and now this brutally nihilistic spy thriller is another. 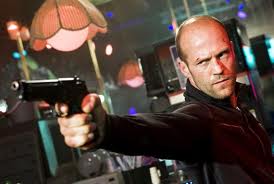 Statham portrays Danny Bryce, a British ex-mercenary who’s forced out of retirement in 1981 when his mentor (Robert DeNiro) is kidnapped by an exiled Arab sheikh (Rodney Afif). In exchange for the hostage’s life, the sheikh wants Danny to return to the U.K. and kill the three members of the Secret Air Service — the famed elite British military unit — who are responsible for the deaths of the sheikh’s three sons during the recent British covert war in Oman. The marks are all paranoid not-so-old soldiers who are eminently capable of killing anybody who comes after them. Their deaths are supposed to be made to look like accidents. Oh, and Danny and the team of assassins he assembles for the job soon find themselves being tailed by another assassin, Spike Logan (Clive Owen, who looks badass even with a pencil mustache), a fanatical ex-SAS man who wants nothing more than to torture and slowly murder the bastards who are picking off his friends.

The script is based on The Feather Men, a controversial supposedly-based-on-fact 1991 novel by Sir Ranulph Fiennes, whom the movie cheekily turns into an effete character who’s dangled as bait in a Logan-set trap for Danny. First-time feature director Gary McKendry does a decent enough job with all the hand-to-hand combat sequences and car chases, especially during an ingenious scene when Danny’s team engineers a freeway accident for one of their targets. Mark Sherring’s script is guilty of some clinkers (“Killing is easy. It’s living with it that’s the hard part.”), but also dishes out some verbal red meat that nicely complements all the action. (An SAS boss, fresh off his helicopter, puts an underling in his place: “Who am I? I’m the guy they let fly around in an unmarked chopper with a gun. You can call me Mfwic. That’s ‘motherfucker what’s in charge.’ ”)

The real distinguishing mark of this film is its overhanging sense that there are no good guys in this story. Danny and Logan are both pawns in a larger game and are both sold out by their respective paymasters. Logan’s belief in his country and the glory of military service only leads to disillusionment. The movie tries to soften things with a subplot about Danny’s relationship with an Australian woman (Yvonne Strahovski from TV’s Chuck), but it barely registers except as a plot device. Look closer at Killer Elite, and you’ll see an inky portrait of a world that has lost all moral compass. That’s stronger stuff than most action thrillers give you.