The Oakland A’s are currently a distant third in the American League West behind Anaheim and our own Texas Rangers. Though they made the playoffs several times in the early ’00s, the team never won a World Series and has been an afterthought for some years now. So it’s easy to conclude that the revolution wrought by A’s general manager Billy Beane failed. 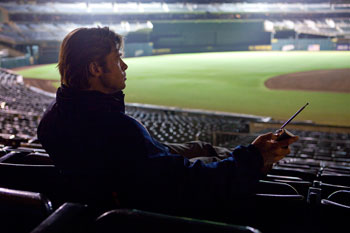 Easy and wrong. Beane’s cool-headed, counterintuitive, statistics-driven methods of assembling a baseball roster were widely adopted by title-winning teams and large sections of the media and fans. Michael Lewis’ book detailing Beane’s practices, Moneyball: The Art of Winning an Unfair Game, found a readership far beyond baseball, earning approving citations from economists, policy analysts, and sports experts around the world. (There are Indian cricket writers who swear by it.) This led to the disappearance of Beane and company’s competitive advantage, but then they’re hardly the first revolutionaries to be overtaken by the events that they themselves wrought.

The movie version of Moneyball badly wants to be this year’s The Social Network, a smart, good-looking, grown-up drama about a couple of guys with a big idea who changed the way we see the world. Heck, one of the writers on Moneyball is The Social Network’s Oscar-winning scribe Aaron Sorkin. For all that, it falls short of David Fincher’s drama, but it does have its moments.

The story picks up at the end of the 2001 baseball season, with the A’s first losing in the playoffs to the spendthrift New York Yankees and then losing three key players in free agency to teams that can pay higher salaries. Billy Beane (Brad Pitt) is in Cleveland seeking a team-rebuilding trade when he meets Peter Brand (Jonah Hill), a Yale economics graduate whose advice goes mostly unheeded in the Indians’ front office. Under Billy’s prodding, Peter spills his radical notions about how baseball’s establishment overvalues certain player attributes and how a smart team can compete on a budget by systematically acquiring underrated players. Convinced, Billy hires Peter for the A’s and sets about signing other teams’ castoffs to replace his departed stars. As the A’s start the 2002 season with a spate of losses that leave them in the AL West basement, Billy and Peter must stick to their plan in the face of naysayers, some of them within their own organization.

The movie pivots on the unlikely partnership of Billy, an ex-jock who exudes brash confidence in the boardroom but is plagued by self-doubt in private, and Peter, an owlish nerd who’s uncomfortable in his own skin but believes wholeheartedly in his untested ideas. Pitt and Hill are starkly different comic actors, and while they do fine work on their own here, the chemistry between them never quite takes. It is bracing, though, to see a severely deglamorized Pitt looking every bit of his character’s 44 years, worn down by years of travel, high job stress, and long sessions of watching game film.

Co-writers Sorkin and Steven Zaillian turn this story into some good comedy, especially a tersely awkward bit in which a nervous Peter is dispatched to inform first baseman Carlos Peña (Adrian Bellani) that he’s been traded. Director Bennett Miller, who hasn’t been heard from since his excellent 2005 biopic Capote, finds the slow-burning comedy in these scenes. Where he runs into problems is creating flow and momentum. The three scenes detailing Billy’s power struggle with skeptical A’s manager Art Howe (Phillip Seymour Hoffman) are repetitive, a failure of economy made particularly obvious by the one scene it takes to depict Billy winning over ornery veteran outfielder David Justice (Stephen Bishop). The early exchange between Billy and his ex-wife (Robin Wright) is unnecessary, too, as are the flashbacks of teenage Billy (Reed Thompson) failing as a baseball player despite possessing all the required physical skills for greatness.

Flawed though this film is, the ending is something close to magical. We know that Moneyball won’t end in a World Series victory that’ll vindicate Billy, so how do the filmmakers come up with a satisfying resolution? This way: With Billy staring at a lucrative offer to run the far-wealthier Boston Red Sox, he drives home while listening to a homemade CD of his young daughter (Kerris Dorsey) strumming a guitar and singing Lenka’s “The Show,” a stunningly apt song choice with a few of the girl’s own lyrics teasing her dad. This supreme moment of grace doesn’t merely help explain why Billy stays with cash-strapped Oakland. It’s this sports movie’s way of saying that there are things more important than wins and losses. Such things are eternally undervalued by the marketplace, unlike batters who can get on base without getting a hit. And yet they’re so much more worth pursuing.