When he was 24 years old, a comedy writer named Will Reiser was diagnosed with a rare form of spinal cancer. Once he got over the shock, he and his buddy Seth Rogen watched a bunch of movies about cancer patients and found them all to be massively depressing. At the time, Reiser mused about writing a funny film about the disease if he survived. Now, six years later, Reiser’s cancer is in remission, and the movie, 50/50, is in theaters. It’s not as ground-breaking as it thinks it is, but it does have its moments, thanks in no small part to the writer’s experience. 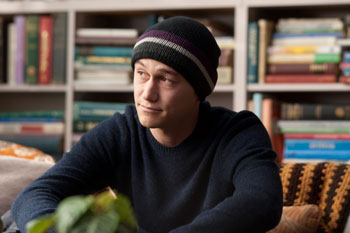 Reiser’s fictional alter ego is Adam Lerner (Joseph Gordon-Levitt), a 27-year-old segment producer for a Seattle public radio station whose doctor informs him one day that his recurring back pain is caused by a malignant peripheral nerve sheath tumor that has a 50 percent chance of killing him. As Adam undergoes chemotherapy and befriends a group of much-older fellow patients, the movie gauges the reactions of everyone around him. His artist girlfriend Rachael (Bryce Dallas Howard) wants to help, but one of the first things she does in response to the news is to buy a forlorn-looking greyhound. His best friend Kyle (Rogen) wonders how to use Adam’s condition to get them both laid. His drama-queen mother (Anjelica Huston) kicks into overprotective gear and promises/threatens to move in. And his 24-year-old trainee psychotherapist Katherine (Anna Kendrick) makes almost every mistake that can be made in trying to help Adam cope with his condition.

Given that the setup involves someone being struck by disease at an unusually young age, Reiser’s script doesn’t go much deeper than other films about illness. In the therapy scenes, Katherine seems to miss the point of Adam’s jokes, and it’s not clear whether she’s humor-deficient or taking everything too seriously because she’s new to her job. Regardless, the disconnect doesn’t yield much besides a funny bit when she fails to understand his reference to Doogie Howser, M.D. The serviceable, appropriately scruffy direction by Jonathan Levine (The Wackness) makes effective use of the Pacific Northwest setting. (The movie was in fact shot in Vancouver.) Still, the storytelling devices here — like the picture and sound fading out of focus when Adam first hears the word “cancer” from his doctor — are nothing we haven’t seen before.

Luckily, the movie’s pretty funny. There’s a sharply observed office party sequence in which Adam’s co-workers all try and fail to offer him profound life-affirming wisdom. Rogen’s Kyle is the comedic sparkplug, as you might imagine, whether he’s gleefully bringing Adam proof of Rachael’s unworthiness or having an exchange with Adam about the electric razor that Adam is about to use to shave his head. Rogen’s comic performances have always contained a kernel of seriousness, but his capacity for gravitas has never been properly showcased in a movie that lots of people have seen. That may end now, as he’s excellent here as a weed-smoking layabout who’s forced to take on a few adult responsibilities when his pal faces death. There’s a great, unexpectedly moving moment, too, when Adam walks into Kyle’s bathroom and comes across evidence that his buddy is taking his illness way more seriously than he lets on.

Gordon-Levitt is comparatively overshadowed for most of the movie, playing a guy who’s doing his best to maintain an air of business-as-usual (and occasionally turning surly and defnsive in the attempt) in the face of his illness. Only near the very end do he and the movie finally achieve something like the power they’ve been aiming for, when Adam finally cracks the night before he’s scheduled for last-ditch surgery that may end his life. In an exceptionally well-acted scene, he calls Katherine and finally lets her hear how terrified he is. In return, he discovers that his therapist — who’s only now beginning to realize the heft of her new job’s responsibilities — is scared deep inside, too. Underneath all its indie trappings, the sex jokes, and the Pearl Jam songs on the soundtrack, 50/50 may be little more than a disease-of-the-week movie. However, such glimpses of truth make it a rather good disease-of-the-week movie, one with an uncharacteristic but well-earned happy ending.