Fort Worth filmmaker Cameron Bruce Nelson, 29, didn’t always want to be a writer-director. In fact, he only got into filmmaking after graduating from the University of Texas at Austin with a double major (history and cultural anthropology). Nelson, who divided his childhood and teenage years between Austin and Dallas, also traveled a bit in Europe and South America after graduation and then returned to the States to live on an organic farm in Virginia near the Blue Ridge Mountains.


Tending the fields and caring for the animals enabled him to afford to live in a small cabin on the property. During the three years he lived there, Nelson played in a band and shot experimental music videos as well as documentary-style footage of people and places in Virginia. 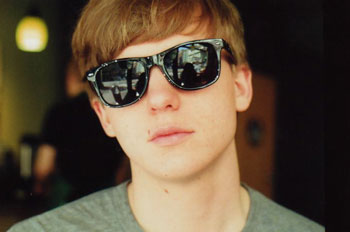 “I was more into being a musician on the farm,” Nelson said. “The videos became a way of combining music and images. And when I moved to Fort Worth [in 2007], I completely changed my M.O. I wanted to try narrative films.”

He came to Fort Worth and married his long-distance girlfriend Jessica Fuentes, a professional photographer living here, and they formed Rambos Rainbos Productions, the company under which Nelson has written, produced, and directed five shorts so far. Three of them debuted this year –– the narrative films In Kind (starring local actors Jodie Moore and Wilbur Penn) and New Animal (starring Arlington filmmaker Frank Mosley and local actor Rebekah Kennedy) recently screened at the Dallas Video Festival. (In Kind also screened at the Northside D.I.Y. Film Festival in Brooklyn, N.Y.) Nelson’s music video for “Velvet Days,” a new song by Cleburne’s Fungi Girls, premiered on Pitchfork, the ultra-hip indie-music web site, and screened at the Seen and Heard Video Music Video Showcase in Chicago.

All three shorts are very different but startling in their technical sophistication and thematic ambitions. In Kind is a somber, anxious meditation on a fiftysomething man trying to find a job in a world that’s left him behind; he spends his days riding a bicycle with an almost demonic concentration, to fill up the time and, seemingly, escape his own obsolescence. New Animal –– shot at sunset, or “the magic hour” as filmmakers refer to the evening time that has such poetic lighting opportunities –– is a lyrical, open-ended look at a pivotal moment in a couple’s relationship that may or may not be a breakup. The video for “Velvet Days,” shot on 8 mm film, features a sinister, madcap birthday party complete with bleeding piñatas, maniacal face painting, and ice cream soup served in cupped palms.

In In Kind, a middle-aged man struggles to maintain his identity in a bad economy. “It’s important for artists to bring up issues that are relevant right now, but you have to do it in a way that connects with people,” Nelson said. “In New Animal, I wanted audiences to feel trapped with the couple. I wanted it to feel like one of those memories where you remember every detail, where you shed your old skin and leave it at the scene.”

In Kind and New Animal are almost uncomfortably intimate, with Nelson’s camera hovering near the faces of his actors. He and his wife crouched in the back seat of the car filming the first part of New Animal, recording the faces and voices of Mosley and Kennedy in two long takes. Without a film permit from the city, Nelson shot Moore’s bicycling scenes for In Kind while riding alongside the actor in the back of a pickup and in a Dodge Caravan. He hung on to a seat belt to keep from falling out of the open side door while he aimed his camera.

Nelson is currently working on his master’s in documentary filmmaking at the University of North Texas. He has submitted In Kind to the Lone Star International Film Festival but hasn’t heard back yet. He plans on submitting In Kind, New Animal, and Fungi Girls’ video for the 2012 SXSW film competition in Austin. Meanwhile, he and Jessica are in post-production for another narrative short starring Fort Worth musician-actor Clint Niosi called Hozomeen. And Nelson’s about three quarters finished with the script for his feature film debut, based on his experiences at the Virginia farm. He hopes to return there and film the project using Fort Worth actors and crew. The way he sees it, both Virginia organic farmers and the Fort Worth film scene would benefit.

“Besides telling interesting stories, filmmaking is an outlet that can promote things beneficial to small communities,” Nelson said. But more important than any social agenda, he said, “I like films that ask questions and leave it to audiences to answer them. That’s why I like a lot of European directors [like Antonioni], who sort of write half the script and then let the audience write the other half.”